After the Greek bailout was concluded, it was an inevitability – as certain as night following day – that the Express would be in EU shock horror mode soon afterwards. And so it came to pass: selective fact-picking, predictable taking heads, quotes reinvented, numbers creatively re-told, foreigners duly demonised and readers worked into the usual state of blind frothing. 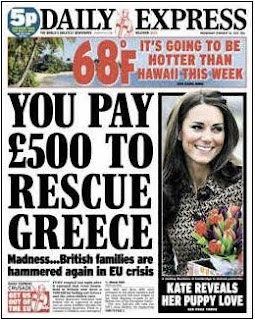 “You Pay £500 To Rescue Greece” shrieked the main headline of today’s paper, which told that “Fury erupted last night”, as it always does in Express land. What “political editor” Macer Hall doesn’t tell is that the Express is, as so often, a day late, and so any “fury” would have “erupted” the previous night. And he should forget the “Senior Eurocrats indicated that ...” which he just made up.

I can be sure of the last point because Hall, and the rest of Des’ hacks, are chained to their desks with noses firmly to the grindstone. They don’t get to see “indications” unless the folks concerned will speak to them on the phone or drop an email. The latter category brings “MPs and MEPs” who were “outraged”. Peter Bone and Nigel Farage, perchance? Yep, that’s the ones.

Having got his quotes, Hall can then pump the usual filler into the piece, calling the bailout “colossal”, and redefining it as a “pot”, so maybe there will be pension implications later in the week, as “pot” means pensions at the Express. In any case, what has been agreed in the latest talks is asserted to be a “handout”, which means it’s like those benefits that asylum seekers get.

But what of that £500 that every family is supposed to be paying? Ah well. This comes down to the International Monetary Fund (IMF). After confirming that 10 Downing Street has advised the bailout “was a matter for the Eurozone”, this is the only way the UK could be involved, although Young Dave’s spokesman said “there is no proposal for an IMF contribution on the table at the moment”.

Mere words, eh? That doesn’t stop the Express: “But IMF chief Christine Lagarde confirmed that it would contribute to the new fund”. She did? Er, no she didn’t: “I intend to make a recommendation to our executive board regarding IMF financing to support a programme”. What programme? And what’s the recommendation? Hall has slipped in two logic leaps there. But readers will probably not notice.

And, right at the end, comes the admission that the £500 figure can only be stood up if all other bailouts – including Ireland and Portugal – are added in, and even then only if there is an IMF contribution to the Greek one. So the headline is not merely misleading, but explicitly dishonest.

So the Express is as predictable as ever: cheap story, usual pundits, sleight of hand, readers frightened, papers sold. Yes, it’s another Benchmark Of Excellence.