Much righteous indignation has been poured out by the right leaning part of the Fourth Estate, bloggers and politicians about the supposedly unsightly protesters on London’s Parliament Square. And, not about to pass up a chance to maintain his high profile, occasional Mayor Alexander Boris de Pfeffel Johnson vowed to clean the place up.

And so Bozza got his court order, and the square was cleared. Except that it wasn’t: even after more court action, this time by Westminster Council, many protesters remain – not just Brian Haw, who has been there since 2001. 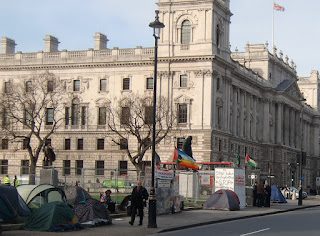 This was the scene yesterday afternoon on the east side of the square, with Churchill and Lloyd George looking out over the tents and banners, and otherwise scanning an empty open space, which has been blocked off with unsightly metal fencing.

It seems that Young Dave would like the square to be cleared of all those jolly unsightly oiks before Prince William of Wales marries the future Princess Catherine of Berkshire round the corner in Westminster Abbey in two months’ time. But Cameron’s pronouncement was a month ago, and it hasn’t happened.

One would hate to be so vulgar as to accuse Bozza of being, as they say in Yorkshire, “all wind and piss”, but he and his old mucker from the Buller haven’t cracked this one yet. Will they ever?
Posted by Tim Fenton at 10:05