Express Too Fast With Own Language

The thought occurred recently that I may be too hard on Richard “Dirty” Desmond and his shrinking retinue of hacks at the Express titles. But that thought did not remain for long, being banished completely in the wake of an article bearing today’s date and the by-line of one Tracey Boles. 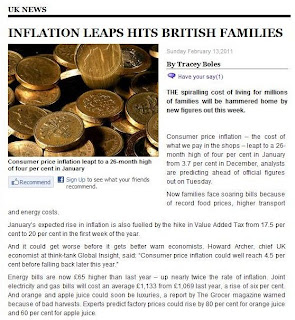 And, as the man said, there’s more: we are then told “Now families face soaring bills because of record food prices, higher transport and energy costs”. Higher transport what? And, if the answer is “prices”, then the sentence is wrongly constructed. Yes, I saw the missing comma after “Now”, but there is worse elsewhere in the article.

After all, there is a more glaring punctuation howler in “And it could get worse before it gets better warn economists”. There is also an occasional missing word, as in “Energy bills are now £65 higher than last year – up nearly twice the rate of inflation”.

And, just to complete the sorry story, comes this finely crafted sentence: “And orange and apple juice could soon be luxuries, a report by The Grocer magazine warned because of bad harvests”.

So a report in The Grocer warned of something, because of bad harvests. Correct punctuation, or inserting those last four words directly after “luxuries”, would have solved that problem.

The standard of English displayed in this article is disgracefully bad. It now appears that, in addition to advertorials, old stories recycled from other papers, and reheated press releases from lobby groups, the Express is not even capable of producing coherent grammar in its copy.

It’s not only cheap and nasty – it’s also not good enough.

All those wee dots and squiggles add up to a lot of ink, which costs money, which Desmond doesn't like.

I think it was a sleepy sub and 'leaps' was supposed to come out altogether. Or 'leaps and' but it was too long so they took the 'and' out. Another missing comma?

Also, this 'families' thing again. It isn't a synonym for 'people'.