The obedient hackery of the legendarily foul mouthed Paul Dacre work to a variety of agenda items, one of which is demonising the EU. So it should surprise no-one to see a headline today suggesting that the dastardly Eurocrats are forcing us to make part of the driving test easier. 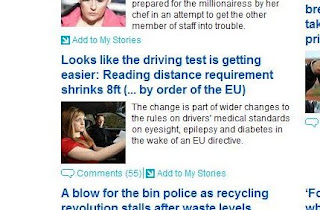 That headline, “Looks like the driving test is getting easier: reading distance requirement shrinks 8ft ( ... by order of the EU)” appears unequivocal: the only conclusion that can be reached is that the EU are ordering the reading distance test to be, well, 8ft easier.

Except that there has been no such order. The sight test – at present a requirement to read a numberplate at a distance of just under 66 feet (or 20 of those garlic crunching French metres) – will indeed have the distance part changed to 17.5 metres, or 57 feet. But the tone becomes more equivocal as you read further.

Soon, we see “The change is ... in the wake of an EU directive”. Then the article tells that Ministers had taken advice from the Government’s “Honorary Medical Panels” on the changes. But if those changes were “by order of the EU”, then why would there be a need to seek advice?

All is made clear at the end of the piece, where Transport Minister Mike Penning tells that “While UK standards must be at least at the level of a minimum standard, we are not required by EU law to relax existing domestic standards where these are higher than EU standards”.

And, on the advice from that Panel, “However, where the panel has advised that a relaxation is consistent with road safety we are recommending that this is adopted”.

Which means that there is no EU order to make the sight test easier, and that the change is being recommended after taking advice from our own experts.

But that would not have fitted the EU-bashing Dacre agenda.

So what the evil Europeans are saying is:

Will they stop at nothing in their crusade to master us?