Today has brought yet another salvo from the so-called Taxpayers’ Alliance (TPA) on the subject of high speed rail. Now devolved to non-job holder Charlotte Linacre, the latest attack brings no new evidence or even new figures, save for more bluster by HS2 Action Alliance (HS2AA) spokesman Bruce Weston, and the TPA’s “rail expert” Chris Stokes.

Actually, Weston brings himself to utter one word so far missing from the TPA propaganda, and that word is freight. However, he does not address the freight capacity issue, as I’ve pointed out several times already (HERE and HERE, for example), and neither does he explain the potential worsening of services to Northampton that would result from the approach he is championing. 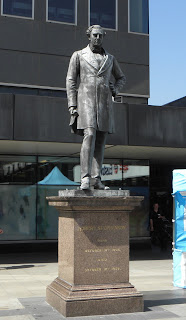 And here a little historical context is in order: when Robert Stephenson built his London to Birmingham railway in the late 1830s, he decided not to serve Northampton, as the distance penalty would have been too great. After all, his remit was to connect, well, London and Birmingham, and the best route passed to the south of the town.

So Northampton was only served later, and the line carries not only a distance penalty, but also is twisty and slow. When BR first modernised the line in the 1960s, InterCity services were directed to the fastest route, and Northampton was left with what was effectively a commuter service: trains to Birmingham used the Fast lines and did 100 mph, while those to Northampton used the Slows and did 75.

Adopting the package of improvements advocated by the TPA and HS2AA would move those trains back to the Slow lines and therefore decelerate the service, unless the fifteen or sixteen proposed InterCity services an hour included some running via Northampton, and that would make those services slower, reducing the Cost Benefit ratio on which the TPA and HS2AA analysis relies.

Moreover, the reduction in capacity for local and regional services that the TPA approach implies would worsen overcrowding not only for Northampton passengers, but also those using Milton Keynes and stations further south. It is therefore no surprise that both the TPA and HS2AA make no mention of commuter services generally, nor of Northampton specifically.

But they do maintain their negative attack on high speed rail, so that’s all right, then.
Posted by Tim Fenton at 12:47