Express – Making Your Mind Up

If ever a topic generated column inches in the modern era, it had to be the supposed link between mobile phones and cancer. From cheapest tabloid to most upmarket quality, the Fourth Estate has gone to town on the subject. And one paper that needs to fill those column inches more than most is the Express.

Problem is, the Express seems to have trouble making its mind up as to whether mobiles cause cancer: over the past three years, they have pontificated on the question many times. The majority of the pieces that are shown here are in the Yes camp, but the latest says No. And one of the paper’s hacks manages to get a foot in both sides of the debate. 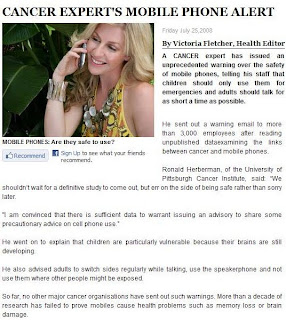 So do mobile phones cause cancer? Back in July 2008, the verdict seemed to be Yes, as reported by Victoria Fletcher, Express Health Editor. 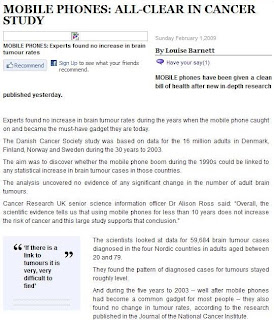 But by the following February, the answer was a reassuring No, according to hack Louise Barnett. 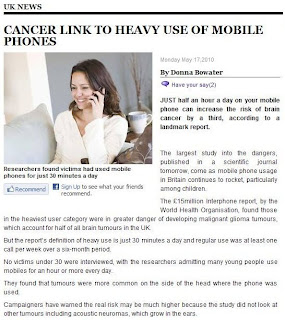 However, over the next year and a bit, opinion had moved back to a worrying Yes, in a piece by-lined by Donna Bowater. 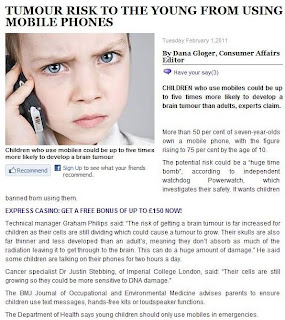 And by the beginning of this month, there was yet more concern, as that Yes verdict was extended specifically to the youngest mobile users, in an article authored by Consumer Affairs Editor Dana Gloger. 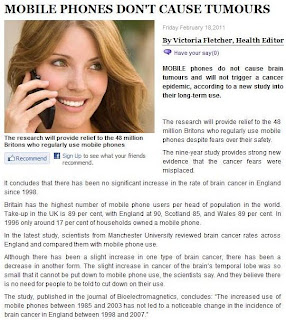 But all is now well: today, the Express reports a firm No, as told by the paper’s Health Editor. That’s Victoria Fletcher ... who, er, was saying something rather different back in July 2008.

That, of course, is consistent not with any kind of editorial line, but the re-hashing of press releases, together with a shortage of sub-editors. More evidence, if it were needed, of the cheap and nasty nature of the Desmond press.
Posted by Tim Fenton at 10:09