Cable news channels across the USA have experienced a reduction in viewer numbers since the period running up to the 2008 elections. But some hosts have seen greater reductions than others, most significantly the increasingly wayward Glenn Beck, “star” of Fox News Channel (fair and balanced my arse).

Time was when Beck could lay claim to pulling in around three million viewers to his 5pm ET weekday show, making him one of Fox’ highest rating hosts. Not any longer: the only show on that network that now regularly draws three million plus is at 8pm ET weekdays, and is fronted by old pro Bill O’Reilly.

Small wonder, then, that Bill-O is the go-to man for talking points and rebuttals, which take up a part of almost every show. But while O’Reilly has maintained his Number One slot at Fox, Beck has slipped. Second place is now shared between Sean Hannity, who follows Bill-O at 9pm ET, and Bret Baier, whose show airs directly after Beck’s. 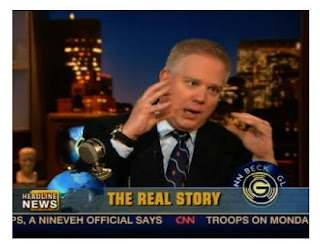 Last week, the Monday to Thursday numbers show that Beck did not pull in even two million viewers on any of those days. On all four days, Baier did better, and on Tuesday, even Shep Smith’s 7pm ET show beat Beck. It must concern Fox management that Beck has shipped 39% of his viewers in a year, with the loss rising to 48% of the 25 to 54 year old demographic.

Elsewhere at Fox, there is scepticism towards Beck, as shown by his recent appearance with Bill-O, where O’Reilly didn’t buy the apocalyptic Beck view on Egypt and the Middle East. And the eccentricity of Beck has recently spread to apparent paranoia over Google, as I noted recently.

The effect has been to cause the media world to cast Beck as a figure of ridicule, as shown by this piece on the HuffPo, a send-up titled “10 More Websites Glenn Beck Doesn’t Trust, Other Than Google”.

Glenn Beck – not just Barking, but halfway to Upminster.
Posted by Tim Fenton at 11:59