Express Race To The Bottom

Today, it is hard to believe that, back at the end of the 1940s, the Daily Express was selling four million copies a day. The mainstay of what was then the Beaverbrook press was run from its own landmark headquarters on Fleet Street – later dubbed the “Black Lubyanka” by Private Eye – and its investigative journalism was respected, and even feared, by the rich and famous.

How are the mighty fallen: nowadays, the Express sells around 650k on a good day, much of its content taken from the PA wire or often (a day old) from other papers, or blatant churnalism, the recycling of press releases. In today’s edition, the lobby group press release has been promoted to main story on the front page.

So, while other papers talk about last night’s Academy Awards ceremony (Mail and Telegraph, for instance), or discuss the situation in Libya (Guardian and Independent), Richard “Dirty” Desmond’s flagship title is reduced to headlining a press release from yet another Astroturf lobby group, this time Open Europe. 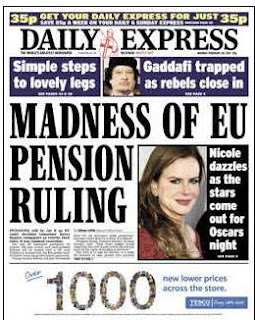 Who they? This Economist article calls them “the most influential Eurosceptic campaign group”. Apparently, Open Europe very much want the single market part of the EU, but none of the rest, managing not to notice that you only get the single market with some cohesion of law and other regulation.

This is a most convenient fit with the agenda of the Express, which devotes a disproportionate amount of its copy to Europe bashing, and is campaigning for the UK to leave the EU – a campaign that will last a very long time, as it isn’t going to happen. So the front page is given over to an agenda item, rather than news.

It gets worse: the paper’s Oscars coverage is relegated to a supporting role, so readers will be behind the curve compared to those who read the Mail, and for those looking for news from Libya, this too is given minor status and looks suspiciously like old copy. One could not devise a better way to drive away readers.

Other papers are driven by their own agendas – the Mail being typical – but there are times when even the legendarily foul mouthed Paul Dacre knows that his readers want news events to take priority. That’s why, whatever one may think of the Dacre agenda, the Mail is outselling the Express by around four to one.

What would Max Beaverbrook have thought? How are the mighty fallen.
Posted by Tim Fenton at 11:00