Del’s Considerably Cleverer Than You

Still telling the world that the body of established science is wrong, that it is “monstrously corrupt”, and that “the game’s over” is Maily Telegraph blogger James “saviour of Western civilisation” Delingpole, in a post published yesterday. And the first reason advanced as to why Delingpole is right, and those in the scientific community that disagree with him are wrong, is that they are “not bright enough to get it”.

That’s right: the head of the Royal Society, Paul Nurse, who so distressed Delingpole recently, is “not bright enough”. James Delingpole, who took English Literature at Oxford – yet cannot, as I noted recently, deploy a competent sub-set of the language in his writings – is in the uniquely privileged position of being able to denounce a Nobel Laureate as “not bright enough”.

And what event proves the point? Here we have to return to the emails hacked from the University of East Anglia Climate Research Unit (CRU), and one exchange between Phil Jones and Michael Mann. Delingpole knows the meaning of this exchange, because, well, he hasn’t asked either Jones or Mann, but he just knows.

What he also knows is that the knowledge he now possesses means that the “peer review” process in climate science is corrupt, a tool of vested interests. Moreover, Delingpole asserts that the debate over global warming is “a political one not a scientific one”. Sad to say, the missing comma does not turn Delingpole into Keynes, and nor does his statement stand the most basic of analysis. 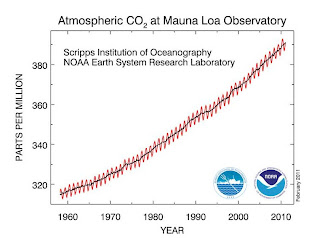 One of the clearest indicators of increasing levels of carbon dioxide in the atmosphere is that from the Mauna Loa observatory in Hawaii. This was primarily the work of one Charles Keeling, and the upward trend is known as the “Keeling Curve”. Keeling was honoured by both Al Gore (then Vice President) and George W Bush (then President).

Charles Keeling was a registered Republican.