As Peter Hill says goodbye to the Daily Express, with the paper’s circulation languishing below 650,000, it is hard to believe that, in the great days of Max Aitken, that circulation peaked at around four million. And it is equally hard to believe that, in those days, reporters went out and got their own stories, rather than copy them off the PA wire or lift them from the previous day’s editions of rival papers. 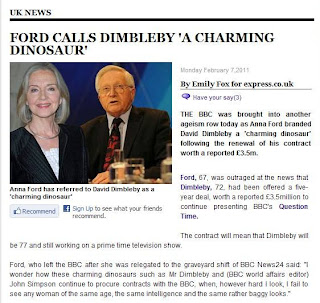 First on Monday ...
Because the Express is now, it seems, reduced to repeating stories just to fill the paper: yesterday, under the by-line of Emily Fox, came the story of Anna Ford’s “Dinosaur” criticism of David Dimbleby’s alleged new deal at the BBC. There is also a critical comment about the Beeb’s John Simpson. 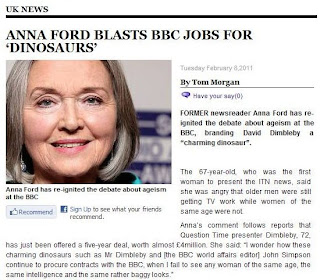 And today comes a remarkably similar story, this time under the by-line of Tom Morgan, once again about Anna Ford, with the same “Dinosaur” criticism of Dimbleby Major, and a mention of John Simpson. Thus the spiritual home of Phil Space.

At least there isn’t a plug for Channel 5 in the articles.