It’s not uncommon to see two different parts of the Fourth Estate having very different takes on events. But to have almost diametrically opposed takes on a mere 35 minute TV show is unusual.

Yes, we’re back in the wacky world of Richard “Dirty” Desmond, and the re-launch of Channel 5 yesterday, which featured OK! TV, a spin-off from Desmond’s tacky sleb and goss magazine. As I’ve already observed, the launch of this show has not been free of incident, despite the Express advertorials, as Des managed to alienate prospective presenter Denise van Outen last week.

So what was the verdict? Ah well. Here we find that difference in takes. The Express, in whose running Desmond does not interfere (because he said so in court, on oath), today ran a puke-making puff piece titled “OK! TV Kicks Off With A Celebrity Scoop”, with the fawningly desperate observation that the show came from “a patriotic red, white and blue studio”. 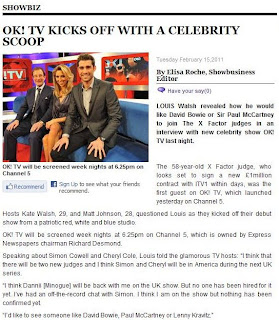 The fawning, as can be seen, extended to a distinctly creepy promo photo showing unfortunate stand-in presenter Kate Walsh having to sit next to Dirty Des himself, something that those still wondering why van Outen thought better of the gig might like to take on board.

As to the show’s content, even the fawning Express advertorial could only manage one throw-away line from guest (and X Factor judge) Louis Walsh, on his wish list for future X Factor judges. And any member of the public with a life should waste 35 minutes of it for that? 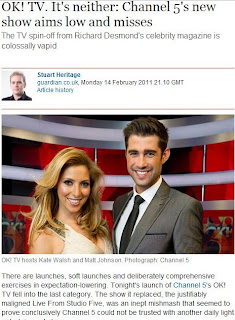 Not surprisingly, the remainder of the press has had better things to do than give Dirty Des’ cheap and nasty new show the oxygen of publicity, with the long straw being drawn by the Guardian’s Stuart Heritage. His headline sums it all up: “OK! TV. It’s neither: Channel 5’s new show aims low and misses”.

Just in case anyone fails to get the hint from the headline, Heritage ponders “It is hard to know who it is aimed at. Animals? Sock puppets? Piles of dust?”

Looks like another “Benchmark Of Excellence”, then.
Posted by Tim Fenton at 12:47