Libyan dictator Muammar Gaddafi has long been rumoured to be the bearer of appalling flatulence. But what of the evidence? Well, here it is, three different kinds of it.

Anecdotal evidence: the Maily Telegraph’s Con Coughlin reported back in 2008 that Gaddafi “displayed the ... habit of breaking wind loudly – and for extended periods”, and observed “it’s something to do with the bean stew that is a staple of the Libyan diet”.

Circumstantial evidence: Gaddafi, as with others in the Dictators’ Club, can pick and choose the style of his accommodation, but still lives in a tent. Why else would he do that, except to disperse the pen and ink from the constant blowing off? 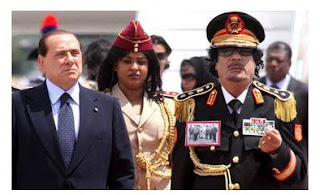 Photographic evidence: here is Gaddafi with Italian PM Silvio “Duce” Berlusconi, taking the salute. One look at Berlusconi’s face is all you need to know.

Gaddafi’s bodyguard, standing next to “Duce”, is clearly unmoved. But then, she’s probably heard it all before.
Posted by Tim Fenton at 10:33