Express Out Of The EU

Much hot air has been generated in the last few days over the issue of votes for convicted prisoners, and in the Commons yesterday evening, MPs voted to reject any idea that those prisoners should have the vote, despite a ruling from the European Court of Human Rights (ECHR).

As the wheels have been turning at Westminster, the Fourth Estate has also been pondering the votes-for-prisoners question. The conclusion reached depends more or less on the political stance of the paper in question. But thus far, the press has been able to differentiate between the ECHR, set up in 1950 by the Council of Europe, and what is now the EU. 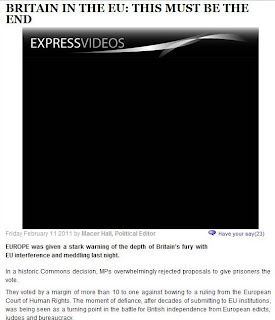 Not any more: the flagship of the Desmond press, the Daily Express, has today reported on the vote under the thundering headline “Britain And The EU: This Must Be The End”. And, to underline the confusion, the article tells of “The moment of defiance, after decades of submitting to EU institutions”.

Just to make sure its readers got the message, there was also “EUROPE was given a stark warning of ... Britain’s fury with EU interference”. So it’s clear that the headline was not some kind of aberration: standards at the Express have fallen so far that the hacks there cannot tell the difference between EU and ECHR.

Not a good selling point for Macer Hall, the Express hack whose name appears on the article.