Supermarket Sweep – The Invocation Of Tescopoly

Last September, I discussed the stand-off between Sainsbury’s and Tesco in Crewe, where the former were intent on “redeveloping” a site on one side of Vernon Way, literally across the road from the latter’s largest local outlet. Both had gained planning consent for their plans: both proposals were to flatten the existing store and build a bigger one in its place.

But Sainsbury’s have hit a snag: they need to find another site for Dunelm Mill, who are occupying part of the building to be demolished as part of their scheme. Rumours persist that a large unit on Grand Junction Retail Park may be the solution, but no firm date has been set, and the planning permission will run out later this year. 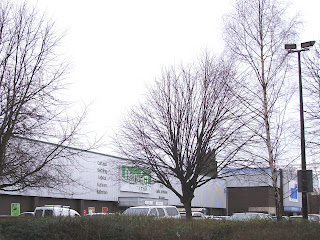 Dunelm Mill - not moving yet
So it might be thought that Tesco would sit tight, but that would be to misunderstand the empire which Terry Leahy will exit today. Tesco don’t just want to keep up with Sainsbury’s, they want to bury them – along with Asda, Morrisons and the rest. Thus the announcement that the store Tesco inherited from Safeway would close, well, today. 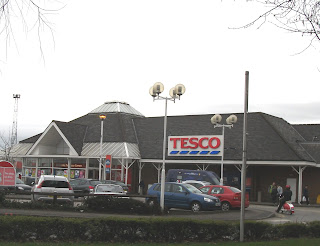 Not long for this world - the former Safeway store
It didn’t happen, but it will, after the latest planning application gets approval: with almost indecent speed, a “temporary” Tesco has appeared literally across the tracks from the existing store. This is ready to go, and will make sure the company keeps hold of much of its customer base while the building work is in progress. That work should now start in May, so the new “Extra” branded Tesco will open next year. 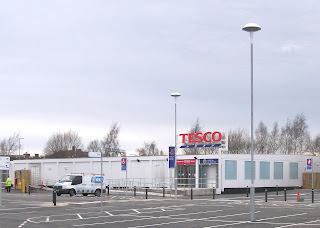 Ready to open - the Temporary Tesco

Does the area actually need this store? Well, no it doesn’t. There is no campaign for more supermarkets, no food or drink shortage, and plenty of choice: as well as Tesco, there is a large Asda in central Crewe, plus a Morrisons, as well as an Aldi and a smaller Sainsbury’s. And there are freezer shops and specialist food outlets in town.

Because, with Tesco, it’s not really about choice, but about grabbing more of the market. Hence their holding over 30% of that market already. Might this new store squeeze other retailers to the extent of putting them out of business? Whether or not it does, that isn’t Tesco’s concern. They’re going to do what they’re going to do, and everyone else has to deal with it. End of.
Posted by Tim Fenton at 17:09