It is February, and some snow has fallen on England’s northern hills. Film at 11, one might think, but that is to reckon without the Corporal Jones brigade at the Mail and Express, who have been caused to run around in headless chicken mode by a mere transient weather event. Let’s look at some reasons for that snowfall.

One, we have a kind of battle going on between drier and colder air coming in from the east, and more moist and mild air from the west. All that moisture means what the forecasters sometimes call precipitation: whether it comes down as rain or snow depends not only on the temperature in low lying areas – like cities and large towns – but how the temperature falls as altitude above sea level increases.

Two, this fall in temperature is called the Lapse Rate, and in average conditions it falls by 0.65 degrees Celsius per hundred metres. So a temperature of, say, four degrees on Merseyside (and rain) could mean less than one degree in parts of the Peak District, the latter being cold enough for the precipitation to come down as snow. 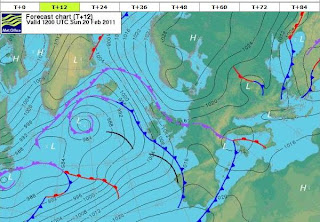 Sunday noon chart from the Met Office
Also, a look at the synoptic charts published by the Met Office show that the weather pattern is set to change over the next few days. The chart for noon today shows the circulation around a High pressure area centred over Scandinavia: this is bringing colder air to Eastern areas. A Low pressure area with a centre to the SW of Iceland is bringing frontal systems eastwards – but slowly. 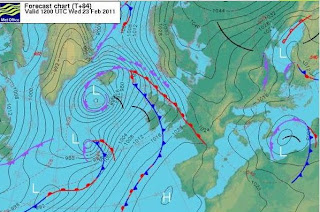 Now look at the same chart, but with the forecast for noon on Wednesday. The Low pressure area has intensified, and the High over Scandinavia has retreated a little. The Low will drive eastward, and those frontal systems, together with a steepening pressure gradient, will mean a combination of rain and wind, but with the prospect of milder conditions to follow.

Getting knowledgeable about meteorology is not difficult, well, not unless you’re a Mail or Express hack, that is.
Posted by Tim Fenton at 18:45