Recently, press campaigner Max Mosley was accused by the obedient hackery of the legendarily foul mouthed Paul Dacre of racism, an interesting claim given the Daily Mail’s less than stellar track record on the subject. At issue was a leaflet issued during the by-election campaign back in 1961 in Manchester’s Moss Side constituency. Mosley was the election agent for his father Oswald’s Union Movement party. 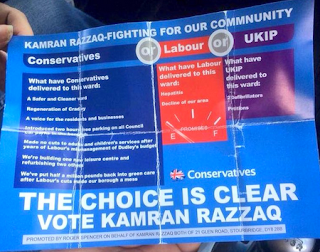 The leaflet contained the claim “Protect your health. There is no medical check on immigration. Tuberculosis, VD [venereal (sexually transmitted) disease] and other terrible diseases like leprosy are on the increase. Coloured immigration threatens your children's health”. It stopped short of claiming that immigrants brought disease with them, but the inference was clear. Mosley denied ever having seen it. The Mail didn’t buy that.

But the Mail is nothing if not inconsistent in the application of its righteous anger: another right-wing party has just accused its principal opposition of spreading disease, and thus far there has been silence from those in the Northcliffe House bunker. Perhaps the difference is that Mosley is perceived by the Mail as a threat to their ability to dump all over the little people and behave as they see fit in order to impose their views on the populace.

Kamran Razzaq, though, has no known ambitions in that area, and so he gets no coverage in the mainstream press for claiming that the Labour Party spreads hepatitis. You read that right: Razzaq, who is standing for a council seat in the West Midlands, has had a leaflet put out on his behalf asserting “What have Labour delivered to this ward … Hepatitis … Decline of our area”. Class act, those West Midlands Tories. 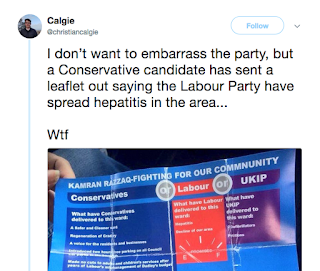 The claim has caused such embarrassment within The Blue Team that it is one of their number who has called out Razzaq: Chris Calgie, who describes himself as a “Parliamentary and Tory bag-carrier”, told his followers “I don’t want to embarrass the party, but a Conservative candidate has sent a leaflet out saying the Labour Party have spread hepatitis in the area... Wtf”. And he had more to say on the subject.

“The reason I shared it is that often in politics, embarrassment is one surefire way to get a party to act. Far too often with CCHQ, devolved things are too centralised and - as in this case - things that need to be quality checked are left totally to nutters in local associations”. He’s certainly right that his party in the West Midlands is now being talked about for all the wrong reasons - two days before those local elections. 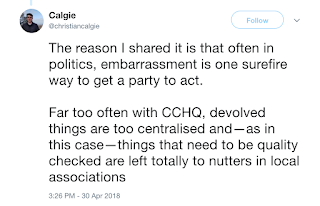 And if it was wrong for the party of unrepentant racist Oswald Mosley to spread scares about disease in order to frighten voters into the polling station in 1961 - and it most certainly was - then it’s totally out of order for the Tories, or indeed anyone else, to be doing the same thing in 2018. Pity that our free and fearless press won’t be on the case.

That’s because most of them want the Tories to win as many seats as they can hold on to next Thursday. What you will not read in the Daily Mail.

Further evidence, if it was needed, that this country has moved even further into deeply reactionary far right political territory. Or, if you prefer it, a "hostile environment". All of it impelled by the tories, cringeworthy New Labour and pathetic LibDems, all of them different factions in a de facto one party state. All of it supported by cowardly far right propaganda clerks in mainstream media.

Those who forget the past are condemned to relive it.

It isn't as though there have been no warnings.

Labour's legal department needs to be all over this and get an apology and retraction from the Tory candidate ASAP or take legal action for false statements which are illegal under The Representation of the Peoples Act 1983.