Last Sunday’s alleged “Day For Freedom” in London, brainchild of Stephen Yaxley Lennon, who styles himself Tommy Robinson, attracted the all too predictable violence, when Ali Dawah, who had been invited to speak, and his pal Mohammed Hijab were targeted by some of the crowd. As usual with anything involving Lennon, this was all someone else’s fault. And the someone else was one of his pals. 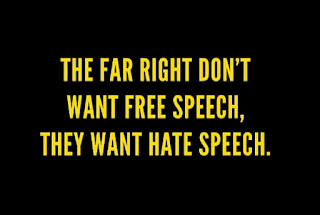 By midweek, Far Right Watch had picked up on the falling out: “The Fash are falling apart tonight. Acrimonious insults and threats abound between Football Lads Alliance @TrueFla, Tommy Robinson and various other persons / groups, re Sunday's violence”. 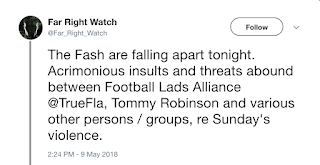 What could they mean? We did not have to wait long to find out. Lucy Brown, who was (note past tense) one of Lennon’s pals, and had been helping to organise the event, Tweeted “If you oppose Antifa attacking me but do not oppose the DFLA attacking Mohammed Hijab then you are a hypocrite”. This did not find universal favour.

Whoever was in charge of the Democratic Football Lads Alliance Twitter feed was having none of that. “Again this is all your doing! Thought you where being smart and failed miserably. We are known for our peaceful demos. Seems you attract trouble tho! I’d give up your day job”. This in turn was not allowed to pass by Ms Brown. 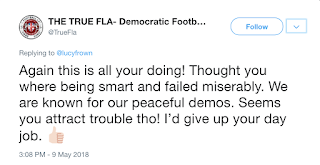 “Some of these men were seemingly friends with and/or DFLA stewards who were appointment on the day last minute and not vetted … I also have some further information which I will be passing onto the Police”. By this time, some of those freedom loving folks from the event were denouncing her as a “grass”, and worse. 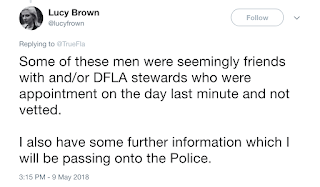 The DFLA shot back “They where in fact with tommys [sic] entourage. Pass on what you want! We have the video evidence and the fact you instigated it. You tried to ruin the day and failed! Hidden agenda I’d say”. What say Ms Brown? “Go on, post the video”.

Then came the news posted on Facebook: “I have just spoken to Tommy Robinson. Lucy has been sacked because she disobeyed his direct instruction to delete the invite to Ali … Tommy told me he was fuming about Lucy’s disgusting insults and disrespect to the DFLA and the veterans, he totally appreciated the hard work the DFLA and veterans did on the day to stop a minor scuffle turning into a major incident”. 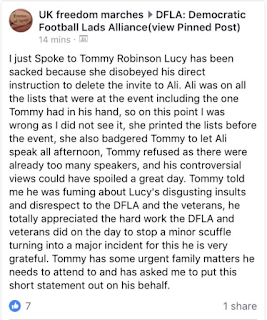 Another Facebook post tells “Very simply one of Tommy's team overstepped the mark and invited a man whose presence was likely to lead to disorder without clearing it with Tommy first, this situation is being dealt with internally by Tommy”. But there was a problem. 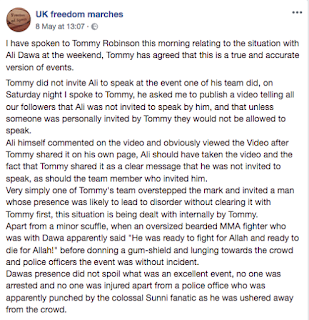 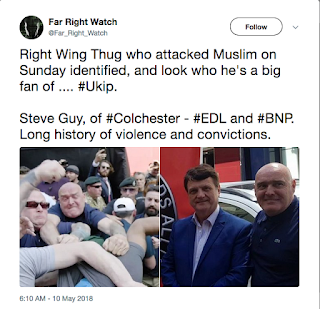 Meanwhile, Lucy Brown has enigmatically Tweeted “If You Defend Free Speech You'll Lose your job”, which more or less confirms the Facebook post. 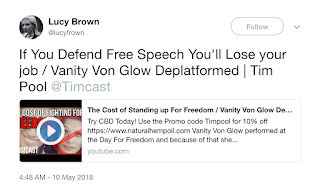 Another far right attempt to become mainstream, another glorious failure. Which has been blamed on someone else. I’m sure the cops will be equally understanding.

I'm a bit confused. The enemy of my friend's enemy is not the friend of my enemy's friend. Or something.

Message to the commenter who used terms like "far left scum" and wished rape upon members of my family - your pearls of wisdom went in the bin.

You should do your research before jumping on the bandwagon.

Hijab And Dawah are extremists so not innocent and are not welcome at any march or event anywhere due to history with anyone speaking out against Islam (sometimes violent history).

I will say it was unfortunate they were attacked but they should NOT have been there as the invite had been withdrew before the event due to Dawah and Tommy's history. Lucy KNEW this. If you knew the history between Tommy and these guys, you would know it was a deliberate attempt to disrupt the event by them.

Ali Dawah has put Tommy's family (Wife, Kids and his Mother) in danger by doxxing and putting info on Twitter and YouTube to show where Tommy lives etc.

He also put a young woman in danger to the point of having to have POLICE protection at her home due to Ali incorrectly identifying her house as Tommy's current residence (it was, in fact, a previous address of Tommy's Mother).

There was also an instance where a young Muslim had posted death threats to Tommy's Wife and Kids (he promised to decapitate his Wife & Kids etc) and after being tracked down by Tommy, admitted that he did it because of what Ali Dawah was saying about Tommy. The young Muslim in question had mental issues so Tommy contacted the Police and told the young lad to get help.

Keep on with your blindness though.

When it comes to doxxing, I'll take no lessons from Stephen Lennon and his followers.

When you say Tommy,is that how you spell Stephen?

If youtlre being predantic yes . Is Ali’s teal name dawah? Is mohammed hijabs name really mohammed OR hijab??? The guy uses a pseudonym , get over it