The Tory Party and its cheerleaders love to highlight the social media lapses of their opponents, gleefully displaying embarrassing Twitter excursions in the hope that the local and national press might give them a few minutes of reflected glory, perhaps even take out one of the Rotten Lefties (tm). But all is so different when the boot is on the other foot. 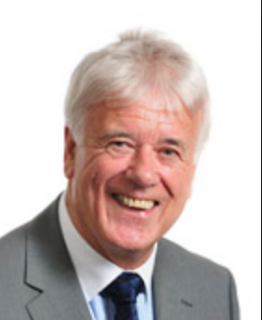 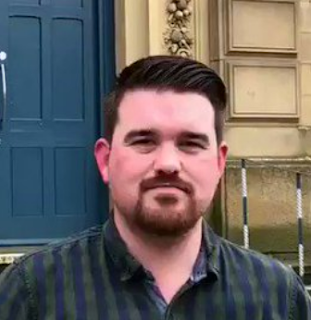 Tameside, one of the ten Metropolitan Boroughs of Greater Manchester, includes the towns of Ashton-Under-Lyne, Audenshaw, Denton, Droylsden, Dukinfield, Hyde, Mossley and Stalybridge. The Tories on the council are led by one John Bell. And one of his flock, representing Stalybridge South, is Liam Billington. Both have serious Twitter previous. 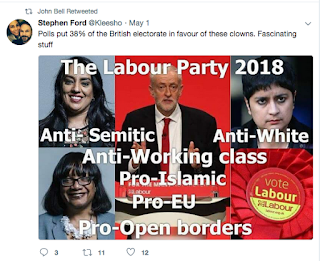 Bell is worryingly incautious for someone who has been entrusted with a leadership role. He RTd a particularly nasty smear which asserted that Labour was “anti-Semitic … anti-White … anti-Working Class … pro-Islamic”. The vicious and abusive content which the source of that Tweet has posted about Labour MP Diane Abbott, well, we won’t go there. 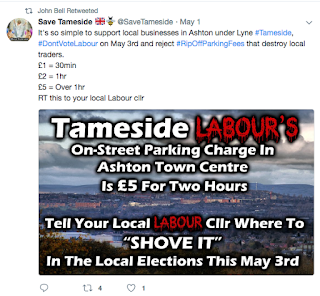 Bell RTd this account, which backs the far right and conspiracy sites

Sadly, Bell is a repeat offender in this genre, also endorsing an account called @SaveTameside which is suggesting voters tell Labour where to “shove” parking charges. That account endorses the far-right, including Battersea bedroom dweller Paul Watson of InfoWars infamy, and Peter Imanuelsen, the Peter Sweden fraudster who claimed to be reporting from Sweden, but was in fact in Northallerton. In North Yorkshire. 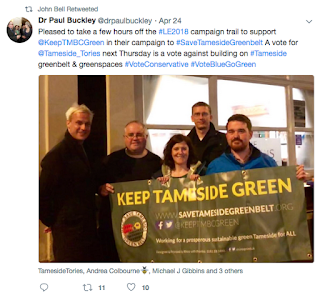 Bell is also happy to show that Tameside Tories are fraudulently appropriating the Green Party’s colours as part of their campaign to save the local green belt, something that they will always find easy as they aren’t the ones having to make the decisions on it. 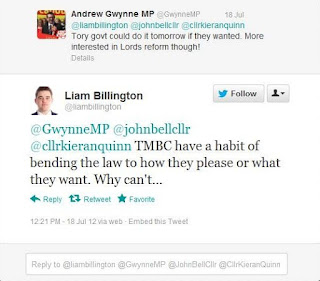 Then we come to Liam Billington, “Caring & campaigning for our community”. What he does not tell is that he used to be the local representative for the so-called Taxpayers’ Alliance, which is how he appeared on the Zelo Street radar. 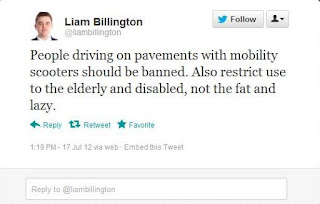 His previous Twitter pronouncements make for most interesting reading. “TMBC [Trafford Metropolitan Borough Council] have a habit of bending the law to how they please or what they want” was one. “People driving on pavements with mobility scooters should be banned. Also restrict use to the elderly and disabled, not the fat and lazy” showed his caring side, not that he’s telling voters about that right now. 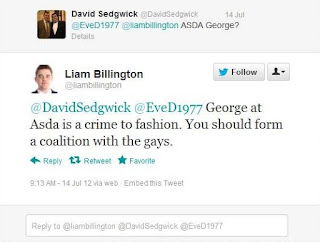 You want homophobia? Liam’s your man: “George at Asda is a crime to [sic] fashion. You should form a coalition with the gays”. And defaming his fellow councillors? He’s right there: “Tameside Councillors to get iPads. Most are over 60 and don’t know how to use a PC. Hardly any of them can read or write either”. He has also described a Pride event as “a bunch of puffs mincing across Ashton”. And there is more. 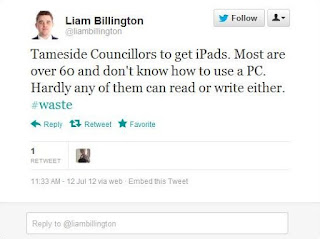 Billington’s pièce de résistance was a defamatory attack on the local Labour club, after a fire thought to have been an arson attack which left the steward “badly shaken” and suffering minor burns. “Stalybridge Labour Club ‘arson’: We’re all clear that this is an insurance swindle right?” was the “caring & campaigning” Billington’s response. 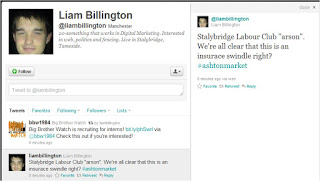 Tameside Tories - they’re a real class act. Not that the national party will even raise a finger to admonish them. I’ll just leave that one there.