While the Tories and their press pals are trying to keep on pointing the finger at Labour whenever the subject of racism is raised, the fact remains that The Blue Team not only has a serious problem with the issue, it appears happy to sweep it under the carpet when it gets in the way of the party’s ability to keep hold of power. 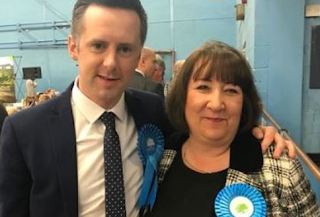 Paul White, leader of Pendle Tories, indulges in an impromptu game of Embrace-A-Bigot

As the Guardian has reported, it was the appearance of Tory minister Greg Clark before the inquisition of the host on The Andy Marr Show (tm) this morning that reignited the issue before the national media. “A former Conservative councillor who was readmitted despite having shared a racist joke so the party could take control of a Lancashire council could face a new investigation, the business secretary, Greg Clark, had said”. 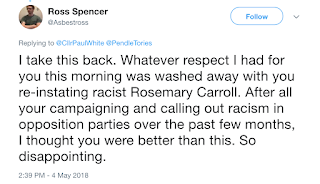 There was more. “Conservatives in Pendle were accused of cynicism after it emerged that Rosemary Carroll had been brought back into the party fold after Thursday’s local election to give them a one-seat majority. Carroll was suspended from the council for three months last June after sharing a joke on Facebook which compared Asian people to dogs”.

What difference did this make? “At the local election count, however, she was seen wearing a Conservative rosette, and when the results gave the Tories 24 seats, the same as Labour and the Lib Dems combined, it emerged she had been readmitted, breaking the deadlock”. Suspension? Due process? Nah, nailed-on expediency. 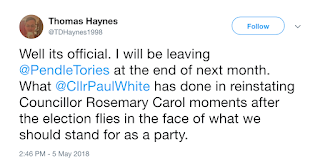 One local Tweeter could not contain his disgust at the move, and said so to Paul White, the leader of Pendle Tories: “Whatever respect I had for you this morning was washed away with you re-instating racist Rosemary Carroll. After all your campaigning and calling out racism in opposition parties over the past few months, I thought you were better than this. So disappointing”. And there was more.

“After calling out opposition parties for racism over the past year, I truly thought Pendle Conservatives were better than this. Have you no self respect at all? Shameful”. One Tory member had had enough: “Well it’s official. I will be leaving @PendleTories at the end of next month. What @CllrPaulWhite has done in reinstating Councillor Rosemary Carroll moments after the election flies in the face of what we should stand for as a party”. 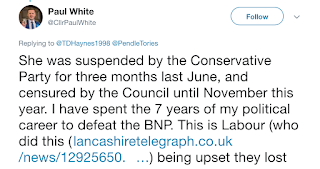 White’s response was a masterclass in small-town amateur spin: “Thomas, this isn’t what happened at all. What has been reported is incorrect, and is left outrage because we won the Council. Happy to meet in person and tell you fave-to-face what has actually happened”. Did a big boy do it and run away? He then explained himself. Badly. 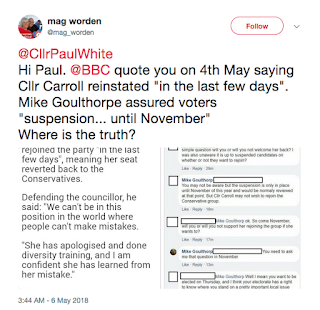 “She was suspended by the Conservative Party for three months last June, and censured by the Council until November this year. I have spent the 7 years of my political career to defeat the BNP. This is Labour … being upset they lost”. So look over there at the BNP, who weren’t involved, it wasn’t really what the rest of the world thought it was, and it was all somehow Labour’s fault really. And he could be arguing in his spare time.

The Tories readmit a racist, and spin it accordingly. That’s the kind of tone-deaf idiocy that gives politics a bad name. What a bunch of clowns.

Par for the tory course.

They'll get worse. Much worse.