Royal Wedding - And The Real World

Those of you in the UK (I’m out of the country right now), and especially anyone in London and the south east, has today had - I stop short of saying “enjoyed” - the pleasure of wall-to-wall Royal Wedding coverage. The allegedly popular press has been awash with coverage, the ceremony has been screened live, with the kind of build-up surpassed only by this evening’s F A Cup final. Few have been spared the full Meghan and Harry. 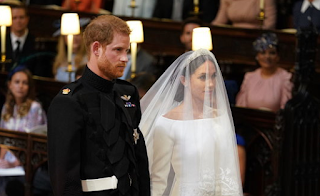 And that’s OK if Royalty, Sleb spotting, flag waving and a little escapism is your bag. We have a hereditary monarchy, and as long as that monarchy remains relevant to, and popular with, most people, then that is how it will stay. But we should remember that there is another side to the town of Windsor, the London area, the south east, and indeed the rest of Sceptre’d Isle. And that was not on view today.

It was not on view to all the firefighters battling to cope with their own budget cuts and job losses. It was not on view to social workers almost drowning under increasing case loads, and hanging over them the ever-present fear of missing a domestic abuse case, a potential suicide, a battered child, and as a result ending up being pilloried by overbearing, judgmental and of course obscenely overpaid newspaper editors.

It was not on view to those who long ago made their own decision to join the minority - but note it well, an increasing minority - for whom the monarchy is no longer relevant. And perhaps they have a point: the Exchequer can find the money to refurbish Buckingham Palace, Kensington Palace, other Royal residences, and indeed the Palace of Westminster, yet there, night after night, we see the homeless there on our streets.

In the early 1930s, Spike Milligan, whose family had arrived in London from British India - his father had been made redundant by the Army - looked at the detachment of Royalty and said something along the lines of “God save the Prince of Wales and Mrs Simpson - and heaven help the rest of us”. One hates to be a party pooper to Harry and Meghan, the new Duke and Duchess of Sussex, but there is another and perhaps more relevant world out there, with a lot less joy, and no small amount of problems.

Enjoy the pomp, circumstance and stardust. But don’t forget the poor souls who are never going to get as much as a sniff of it.

As someone who is actually pro The Monarch as Head of State, I can't stand the hypocrisy of Harry and Meghan, especially her. The first time she was spotted going into Kensington PALACE, she was carrying a bag with "Make Poverty History" written on it. She then witters on about being a feminist, giving up her career, her country, her dog and taking on a religion for some bloke and basically becoming a kept woman. She's a humanitarian who wears clothes costing a fortune and allows her wedding to cost millions. Add to that the smoke and mirrors about her previous life and the convenient ill health of her father and I think you have disaster for the future. Rant over.

Any evidence of this "increasing minority"?

I've been a staunch republican since Elizabeth Windsor's so-called Silver Jubilee in 1977.

At the time I was living in Wolverhampton at the time she paid an allegedly gracious visit to be preceded by the whiff of fresh paint and followed by the stench of sycophancy.

The incongruity of monarchy was summed up for me by the number of half-wrecked buildings along the route of her procession and awaiting the wrecking ball not being very well disguised by being draped in Union Jack bunting.

It's actually possible to aspire to the creation of a fairer society without burning all your worldly goods and going to live in a cave.

There are plenty of people who give millions away to good causes every year and still have enough to live in luxury. Then there are those who write on their Wiki page and in their press releases that they are humanitarians and ambassadors of this and that, who are no such thing but want to look really good and important. However, they do tend to be found out, eventually....