So Farewell Then Tessa Jowell

Politics in the 21st Century is a cynical business. Many who participate are driven by greed, self-promotion, and yes, a total lack of principle. The behaviour of those who report on the whole unedifying spectacle only serves to amplify the callousness, indeed the sheer nastiness of it all. Going into politics motivated by the thought that someone else may benefit from one’s endeavours … that, nowadays, is the rarest of attributes. 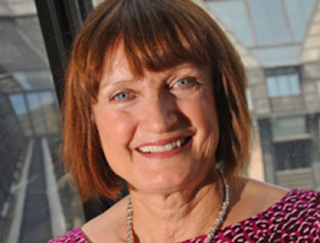 It was the primary attribute of Tessa Jowell, who has sadly lost her battle with brain cancer at the age of just 70. It has been the rarest of sights to see figures from across the political spectrum giving their tributes, from Theresa May to Michael Gove to Jeremy Hunt to Alastair Campbell to Jeremy Corbyn. All have shown their sadness and regret at her passing. So have those on the political fringes who knew her.

Why that should be is not hard to ascertain: Tessa Jowell looked always for how she could make things better for others, as with her introducing the Sure Start initiative for child care. She sought to improve health care outcomes for everyone, brought maternity and paternity leave, and championed the campaign for London to host the 2012 Olympic Games. 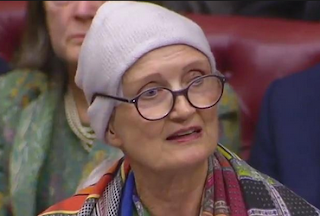 Tony Blair doubted the ability of the capital to win the Olympic bid, but as she told him, “Of course we may not win, but at least we will have had the courage to try”. Blair in return said of her that “She represents the best of political loyalty, which at its best isn’t blind, but thoroughly considered”. She was prepared to tell him when he got it wrong. And her sincerity meant that Blair, who did not always take criticism well, would listen.

How many politicians at the time, one has to ask, could have got Seb Coe, a former Tory MP, to work alongside Blair as well as then London Mayor Ken Livingstone? When the Olympic bid was first mooted, Livingstone was in a first term as Mayor, following an election in which he had stood as an Independent against the Labour candidate. 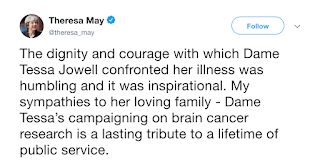 So it has been no surprise to see Theresa May tell “The dignity and courage with which Dame Tessa Jowell confronted her illness was humbling and it was inspirational. My sympathies to her loving family - Dame Tessa’s campaigning on brain cancer research is a lasting tribute to a lifetime of public service”, or indeed Blair reflect “She was the most wise of counsellors, the most loyal and supportive of colleagues, and the best of friends. There was no one like Tessa and no one better. I will miss her more than I can say”.

Nor is it surprising to see Jeremy Corbyn’s response “Devastating to hear the news of Tessa Jowell's death. From Councillor to Cabinet Minister, her achievements were huge, including helping to bring the Olympics to London. Her strength in raising awareness of her illness and fighting for better treatment for others inspired us all”. 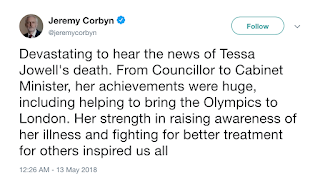 Often, when politicians pass before their time, the tributes pour in, but the thought soon enters that those paying the tributes are doing no more than going through the motions. This time, the impression is clear that they really mean it.

In the interests of balance, Tim.

Making homelessness a crime is not something I'll forgive nor forget her for.

Forgive my cynicism, too, Tim. But...
The evil that some do, sometimes, should live after them.
No doubt the sainted Tessa was a humanitarian, but so far we've had no mention of her highly questionable judgement in assisting British bookmakers to develop their own dependence on crack gambling addicts of their fixed-odds machines. Nor indeed have we been reminded of her obsession with welcoming American mega-casino operators to Britain.
Good that she stood by her husband, though, as his entirely innocent dealings with corrupt Italians dragged through the courts.