When the Murdocch mafiosi needed someone to moralise about the left, there at the front of the Times cab rank was alleged senior political correspondent Lucy Fisher, who has duly brought her remaining readers a comment piece titled “Corbynites’ insults will only hurt themselves”. What insults would these be? “Terms of abuse such as ‘gammon’ and ‘centrist dad’ keep the activists energised but will drive away swathes of voters”. 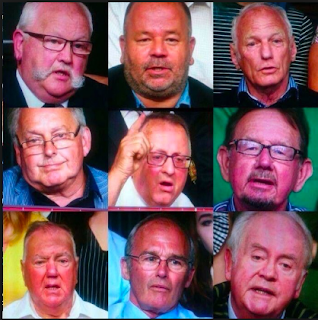 From this, we can tell that someone in the Baby Shard bunker is rather sensitive to being called a Gammon. And yes, it could be one of scores of unappealing hacks and pundits. So what is Ms Fisher’s schtick? “Gammon was last seen on dining tables in the 1970s, often crowned with a slice of withered pineapple. Now it’s back on the menu as the insult of choice among the Corbynite left - and it provides a key insight into the psychology of the Labour leader’s outriders”. How wrong can she be? 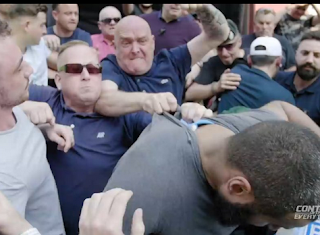 The use of the term Gammon, or the more inclusive Wall Of Gammon (tm), has nothing to do with Jeremy Corbyn, the wider Labour Party, the left, or indeed any shade of political opinion. It’s about those who bluster and protest pointlessly. 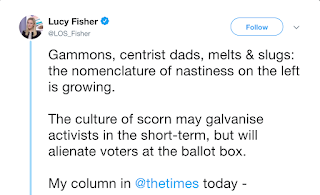 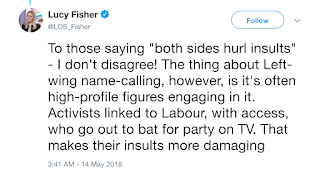 Still, off she went to promote her claims. “Gammons, centrist dads, melts & slugs: the nomenclature of nastiness on the left is growing. The culture of scorn may galvanise activists in the short-term, but will alienate voters at the ballot box”. “Melt” and “Slug” have nothing to do with the left either. Try again. “To those saying "both sides hurl insults" - I don't disagree! The thing about Left-wing name-calling, however, is it's often high-profile figures engaging in it”. So it’s about the right-wing press trying to shut down opposition. 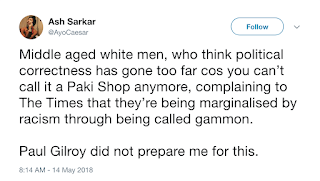 Which is why the chorus of derision has been long and loud today, typified by the reaction of Michael Hoefsmit: “So if gammon is racist, what is snowflake?” (see also Trot, Traitor, Enemies of the People, Remoaner, Saboteur, Virtue Signalling, etc) Ash Sarkar of Novara Media mused “Middle aged white men, who think political correctness has gone too far cos you can’t call it a Paki Shop anymore, complaining to The Times that they’re being marginalised by racism through being called gammon”. It’s that ridiculous.

Aysun Makendzhieva had another angle on the Gammon debate. “Times columnists who defend gammon have to be called pineapples: they’re on the side of gammon” (Ho ho ho) while the rep from JOE mused “Conflating gammon with blue-collar voters is about as classist as you'd expect from The Times”. Ms Fisher never eats at her local Spoons. 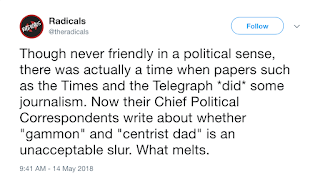 Radicals regretted (sort of) the declining standards of today’s allegedly quality journalism. “Though never friendly in a political sense, there was actually a time when papers such as the Times and the Telegraph *did* some journalism. Now their Chief Political Correspondents write about whether ‘gammon’ and ‘centrist dad’ is an unacceptable slur. What melts” (Ho ho ho). And Mic Wright had some culinary advice for the Times pundit.

“One last thing about that Times opinion piece on ‘gammon’. It didn’t disappear from menus in the 1970s. Wander out of London and it’s still a pub staple. Also, I cooked some a few weeks back. Delicious”. But calling someone a Gammon is about their demeanour.

Lucy Fisher tried to send the left on a guilt trip and shut down debate. All she achieved was to show how out of touch she is. Gun, foot, point, BANG. No change there, then.

The first time I saw the word “gammon” to describe a plump, pompous, red faced, middle aged white man was when The Times tweeted this quote from one of their columns in 2012:

'David Cameron's resemblance to a slightly camp gammon robot is extraordinary. He's a C-3PO made of ham' thetim.es/SCX37I #CaitlinWeek

That’s the same Times which allowed its political correspondent to write a load of tosh this morning..

'I am very sorry to be here, sir,' said Mr Pugstyles; 'but your
conduct, Mr Gregsbury, has rendered this deputation from your
constituents imperatively necessary.'

'My conduct, Pugstyles,' said Mr Gregsbury, looking round upon the
deputation with gracious magnanimity--'my conduct has been, and ever
will be, regulated by a sincere regard for the true and real
interests of this great and happy country. Whether I look at home,
or abroad; whether I behold the peaceful industrious communities of
our island home: her rivers covered with steamboats, her roads with
locomotives, her streets with cabs, her skies with balloons of a
power and magnitude hitherto unknown in the history of aeronautics
in this or any other nation--I say, whether I look merely at home,
or, stretching my eyes farther, contemplate the boundless prospect
of conquest and possession--achieved by British perseverance and
British valour--which is outspread before me, I clasp my hands, and
turning my eyes to the broad expanse above my head, exclaim, "Thank
Heaven, I am a Briton!"'

The time had been, when this burst of enthusiasm would have been
cheered to the very echo; but now, the deputation received it with
chilling coldness. The general impression seemed to be, that as an
explanation of Mr Gregsbury's political conduct, it did not enter
quite enough into detail; and one gentleman in the rear did not
scruple to remark aloud, that, for his purpose, it savoured rather
too much of a 'gammon' tendency.

'The meaning of that term--gammon,' said Mr Gregsbury, 'is unknown
to me. If it means that I grow a little too fervid, or perhaps even
hyperbolical, in extolling my native land, I admit the full justice
of the remark. I AM proud of this free and happy country. My form
dilates, my eye glistens, my breast heaves, my heart swells, my
bosom burns, when I call to mind her greatness and her glory.'

I've only ever seen centrist dad used as a self-description.

(That Dickens quote is great, Anon)

Gammons? Favouring the meat eaters again you will have the veggies up in arms. They should be called Turnips or at the very least Swedes! or maybe 'meat and 2 veg?

It's as it ever was.

I engage in the boisterous rough and tumble of political verbal jousting, and if you can't stand the heat etc.

The mainstream media's defence of Gammon as blue collar voters is also a bit off.

The classic Gammon is the typical golf club bore.
Wears a blazer when it's 25 in the shade, affects a military looking moustache, and gives you the benefit of his opinion whether you want it or not.

Add a bit of finger jabbing to that angry visage and you have the face to accompany the talking book version of every day's "The Sun Says".

PM programme tonight was reporting this (in a jocular framework) as if her accusations were established fact.

This middle-class commenter has seen and eaten gammon at practically every pub and restaurant carvery and countless times for Sunday dinner.

This pillock of a Times commenter really has shown herself to be woefully out of touch. So have the weirdos pretending that it is a 'working class meat.' Uhm, no.

I'm a white, middle-class (whatever that means), slightly overweight male with cash and property assets whose face goes all 'gammon' whenever I hear or read whatever bilge a Tory politico or their good mates in the Press spew. Be kind to 'gammons', Tim. We're not all the same.

Surprised Farage hasn't come out in a pineapple suit..