The shambles that is Brexit rumbles on, uncontrollable - at least, by Theresa May and her pals - and gathering pace as it approaches the inevitably messy dénouement. In its wake come those dedicated supporters, prepared to say anything to keep the departure of the UK from the EU on the road. This, once more, brings us to the parallel universe inhabited by the increasingly isolated figure of Dan, Dan, The Oratory Man. 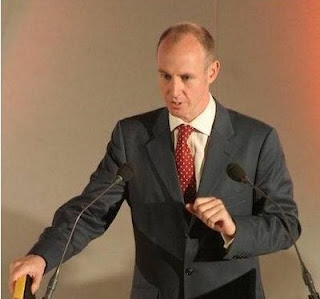 Hannan’s latest slip-up has been on that most appropriate of subjects, bananas. Seeing the reappearance on the British political scene of Mil The Elder, he carefully selected the field on which he was prepared to die, and like Bluebottle from The Goon Show, was then deaded once more. “The EU applies a tariff of €114 per ton to bananas, David. Even if you're not a free trader, what British industry do you think that helps?” he proffered. 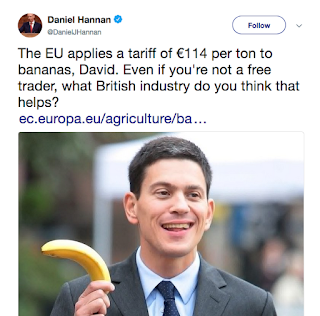 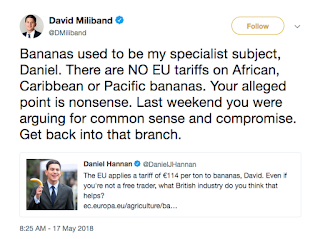 Sadly, Hannan had not been doing his homework (again), as Miliband pointed out. “Bananas used to be my specialist subject, Daniel. There are NO EU tariffs on African, Caribbean or Pacific bananas. Your alleged point is nonsense. Last weekend you were arguing for common sense and compromise. Get back into that branch”. 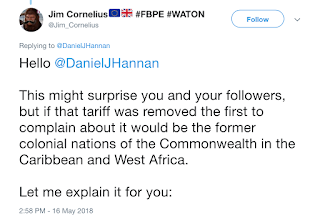 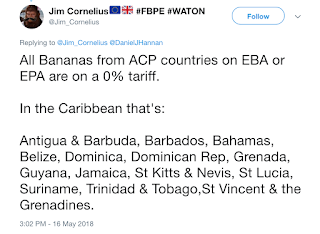 It got worse. A lot worse. Jim Cornelius, who describes himself as “Accidental tariff nerd. Not an expert, I just look stuff up”, responded “This might surprise you and your followers, but if that tariff was removed the first to complain about it would be the former colonial nations of the Commonwealth in the Caribbean and West Africa”. 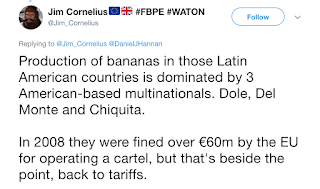 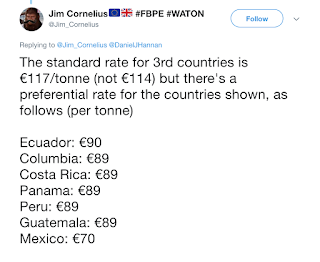 He went to to explain “All Bananas from ACP countries on EBA or EPA are on a 0% tariff. In the Caribbean that's: Antigua & Barbuda, Barbados, Bahamas, Belize, Dominica, Dominican Rep, Grenada, Guyana, Jamaica, St Kitts & Nevis, St Lucia, Suriname, Trinidad & Tobago,St Vincent & the Grenadines”. More bananas, though, came from Latin America: “Production of bananas in those Latin American countries is dominated by 3 American-based multinationals. Dole, Del Monte and Chiquita”. 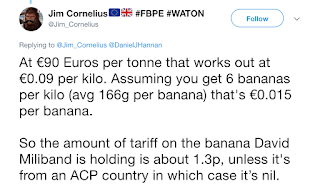 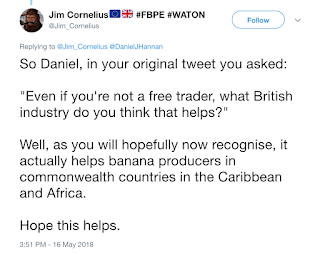 “At €90 Euros per tonne that works out at €0.09 per kilo. Assuming you get 6 bananas per kilo (avg 166g per banana) that's €0.015 per banana. So the amount of tariff on the banana David Miliband is holding is about 1.3p, unless it's from an ACP country in which case it’s nil”. Also, “Tariffs on Latin American bananas protected banana producers in former British & French colonies. But in a trade dispute with US-backed Latin Americans the ACP preferences were deemed illegal by the WTO. So the tariffs are undergoing a phased reduction”. So ultimately it will be even less than 1.3p a banana.

Cornelius concluded “So Daniel, in your original tweet you asked: ‘Even if you're not a free trader, what British industry do you think that helps?’ Well, as you will hopefully now recognise, it actually helps banana producers in commonwealth countries in the Caribbean and Africa. Hope this helps”. And Steve Peers was there to put the lid on it.

After noting “Here's Dan Hannan MEP, Dansplaining about banana imports to the UK. His comments are not only misleading but also give us an insight into what he actually thinks about the Commonwealth”, Peers adds “The link *which Hannan himself provides* points out that there are *no* tariffs on bananas from African, Caribbean and Pacific countries. (Also I think he's confused between metric tonnes and imperial tons)”. 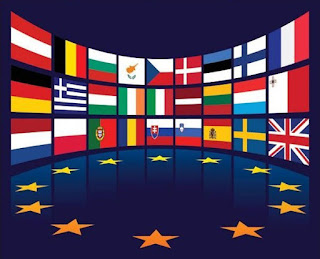 All those happy Brexiteers put Hannan on a pedestal. They hang on his every word. One might expect that the least he could do, to ensure he doesn’t disappoint his followers and make himself look foolish, would be to get his facts right.

But once again he has not. I’ll just leave that one there.

Yebbut, was he talking about straight or curved bananas?

“The shambles that is Brexit rumbles on, uncontrollable - at least, by Theresa May and her pals” and Corbyn with his support for hard Brexit.

Does he really care? Probably not. The oratory man from Del Monte earns his bacon from slagging off the NHS on the American lecture circuit

If you are not following Jim on twitter you should.