The sensitive subject of the small numbers of black students accepted by Oxford University’s various colleges has come back into view, thanks to the efforts of Tottenham MP David Lammy. And the response to his arguments shows that the attitude of those white pundits needs to change just as much as Oxford does. 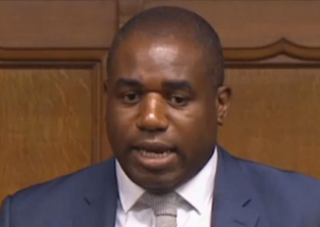 After Omar Khan of the Runnymeade Trust had told “You'll hear a lot of explanations abt why the small number of black students at Oxford isn't a problem. One eg is the relatively few number getting 3 As or above. But 1. There are 630 such students 2. These arguments encourage applicants to think that Oxford isn't for them” (you can see the whole thread HERE), Lammy took up the points raised. 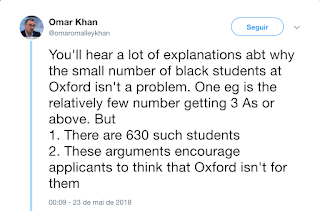 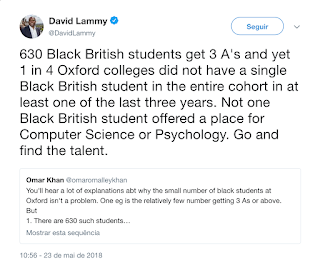 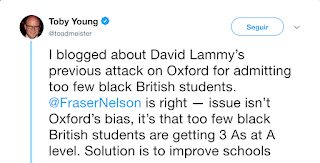 Lammy was not impressed, and he was right not to be impressed. “Toby tell us again about that time you got into Oxford because your Dad (a Baron) rang up the College to ask them to let you in because you didn't get the grades? And then come back to talk to me about institutional bias and why white students twice as likely to get in as black”. 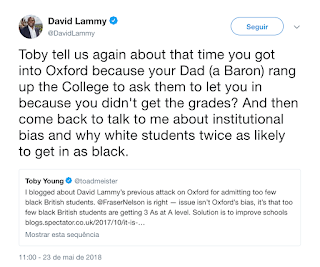 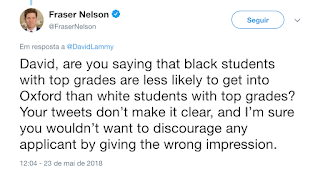 Lammy put him straight, too. “I’m not saying it, the university’s own data is saying it. Putting people off applying by forcing Oxford to publish the data? Fraser I’m sure working class, northern and ethnic minority young people are perfectly capable of looking at the data and making their own minds up”. But the Pundit Establishment wasn’t done yet. 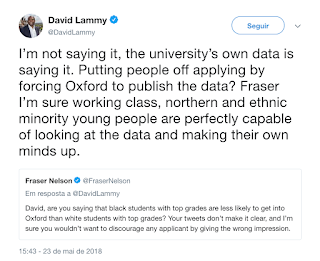 Iain Martin, spinner and abuse merchant of no fixed principle, weighed in. “This monstering of Oxford is ludicrous. It is a leading global institution, not a plaything of govt. Fix the school system”. Oxford clearly ranks as high as any in Rome!

And the same argument Tobes made, which had already been addressed. Lammy had to remind him “Oxbridge gets £700 million a year from the taxpayer and the Oxbridge admissions system decides who gets to be the next Cabinet Ministers, newspaper editors, senior civil servants, FTSE CEOs etc. So it does matter to my constituents and to every person in this country, actually”. We’re paying for it, spinners. 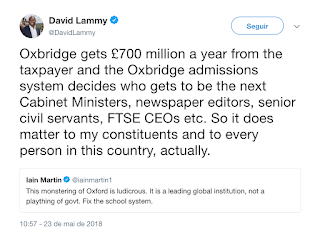 Perhaps those pundits should listen to Lammy, rather than talking at him. Just a thought.

Actual human abilities are not limited per se by "race", geographic location or money earnings.

But they ARE limited by establishment practices. The Oxbridge scam is but one example.

Both Oxford and Cambridge are largely outdated bullshit soap operas. Their main functions are to filter out common sense intelligence and promote compliant modules. The products are clever only in their ability to manipulate in favour of continuance. Their professors and tutors are mostly the musty remnant of Western imperialism. They are citadels of illusion and delusion in a morally bankrupt society and a decaying culture. One of its offshoots is the class-ridden US Ivy League system.

In such mentalities genuine free thinking is at a premium. Small wonder it produces grotesque mediocre gnomes like Nelson and Young and the current far right political class. Small wonder too its media gets more hysterically desperate with each passing day. There is an accompanying stench of dry rot in it all.

Captain Bellend has managed t9 get his way back on the Daily Politics to lie about how he got in to Oxford.

To be fair, if I was going to read Computer Science the last place I would go is Oxford; I'd go to what the Oxford rabble snootily dismiss as "Fen Tech" - Cambridge.

All the so-called 'great and the good' have one thing in common; having read PPE at Oxford.

"All the so-called 'great and the good' have one thing in common; having read PPE at Oxford."

Given the lack of talent displayed by most of the Oxbridge PPE graduates who end up in the Palace of Westminster, I reckon an Oxbridge PPE is the ultimate in joke degrees.