Syria Attack - No. Just No

After a chemical weapons attack last weekend which left scores of civilians, many of them children, dead, the régime of Bashar al-Assad in Syria has been roundly condemned by many of the world’s countries, except its pals in Vladimir Vladimirovich Putin’s gangsterist outfit running Russia, who have declared that it didn’t happen. From the condemnation has come the call that, this time, something must be done. 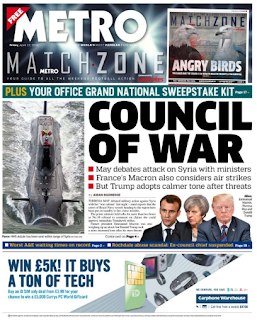 And as usual, we are fed the warlike rhetoric, with any politician considered insufficiently bellicose being shouted down and smeared as some kind of “appeaser”. War, as ever, is the easy option, except for those on the end of it. It is the easiest option of all for our free and fearless press, and those unprincipled but enrichment-hungry politicians who can score another payday by telling that press what it wants to hear.

What is difficult is to stop and think: to get across that we have been part of a bombing campaign for years now, and it has improved the situation in Syria not one jot. It is difficult to point out that every Tornado sortie that dispatches its full complement of bombs and missiles costs the taxpayer the thick end of a million notes. It is difficult to emphasise that there have been quite enough bombing missions flown over Syria already. 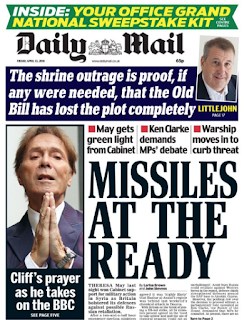 Moreover, it is difficult to stress that, in wading in to a conflict that has already been going on for several years, further involvement is only likely to result in more deaths, more refugees - you remember all those refugees, press people, yes? - and more opportunities for the whole thing to escalate into a direct confrontation between the USA and Russia (plus, maybe, China, if they fancy a share of the spoils and post-conflict influence).

Yes, it is all too easy to sound the drums for war on the grounds that Something Must Be Done, especially when those in favour will continue to have a comfortable and well-remunerated lifestyle nowhere near the conflict. But this cloud now has a silver lining: despite Theresa May trying to railroad Britain into war without consulting Parliament - something she will never be able to live down - the rush to bomb has stalled. 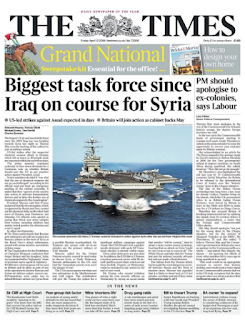 The shouting from Combover Crybaby Donald Trump has died down - after the grownups took him aside and away from his Chauncey Gardiner-like addiction to Fox News Channel (fair and balanced my arse). And if the USA is stopping and thinking, then all the spectator sport of cornering Labour politicians like Diane Abbott, and demanding to know under what circumstances they would go to war, is so much pointless grandstanding.

Whisper it quietly, but the only credible “surgical strike” of any use right now would be one that is guaranteed to take out Assad, and as many of his cabal as possible. The possibility of that being deliverable, and therefore delivered, is not unadjacent to zero. Otherwise, all we have is the leeringly bellicose swaggering of overmonied pundits and self-serving politicians, plus others who won’t be around to carry the can for their actions.

Britain has already taken part in more than enough destabilisation of the Middle East. It is also supplying weaponry and advice to those who dabble in it independently. Yes, the pictures from eastern Ghouta are horrific, but we will not improve matters by just rocking up and dropping yet more high explosive on the survivors.

It’s only a pity that politicians and their press pals can’t admit that.

the only credible “surgical strike” of any use right now would be one that is guaranteed to take out Assad, and as many of his cabal as possible

And even that would beg the question of who would take their place. The late Head Boy's seventy thousand tame jihadis, perhaps?

TBF,Tim, Tucker Carlson was more than fair and balanced on Fox the other night, a veritable voice of reason in the cacophony of crap, that is the MSM these days.

Christ, his father and mother must be rolling in their graves at the sight of that lip-licking dry-mouthed vicarious wannabe murderer.

Putin may or may not be "gangsterist", but if he is he's still next to fuck all in comparison to the homicidal maniacs who own and run the West. Who invade, commit genocidal mass murder, assassinate, and poison democracy wherever they can lay their blood stained corrupt hands. This is just the latest episode. Is it really necessary to post a list of Western wars and colonial atrocities since World War 2?

Meantime, we in Britain are stuck with political jingo gobshites like May and Benn grovelling at the feet of Pentagon lunatics and other US madmen spoiling for another war to test their bang-bang murderous toys.

If war comes, it'll be because we let it. Have the people of the Arabian Peninsula not suffered enough?

Can a scientist out there describe the technology that limits millions of fragments of flying shrapnel only to its intended single victim? Or victims for that matter.

I'm intrigued by the possibilities.

As you rightly say, Western interference and bombing has achieved nothing except sufferering for the Syrian people - a genuine effort at diplomacy is the only way forward! For all his faults Assad has perused a secular path for Syria and from Iraq and Libya we shoukd have learned that any replacement can only be worse.