Alfie Evans And The Stateside Sickos

No parent wants to say the last goodbye to their own children. The loss of a child who never had the chance to grow up, and experience life as most do, is the greatest of tragedies. This week, that tragedy consumed Tom Evans and Kate James, whose 23-month-old son Alfie Evans died early this morning at Alder Hey children’s hospital in Liverpool. The toddler had an incurable and degenerative brain condition. 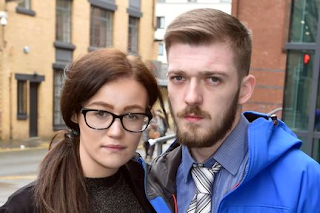 Little Alfie had been in a semi-vegetative state for more than a year. The hospital argued that further treatment was not merely pointless, but inhumane. Then the Stateside pro-life movement rocked up and began to use the child’s plight to further their own ends. The case became an opportunity to attack so-called “socialised medicine”. The pejorative language, the abuse, and the flagrant dishonesty has been jaw-dropping. 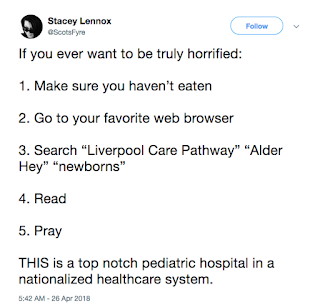 And the resultant outpouring of misinformation should concern any health care professional. Take, for instance, “If you ever want to be truly horrified: 1. Make sure you haven’t eaten 2. Go to your favorite web browser 3. Search ‘Liverpool Care Pathway’ ‘Alder Hey’ ‘newborns’ 4. Read 5. Pray THIS is a top notch pediatric hospital in a nationalized healthcare system”. Nationalised healthcare system. 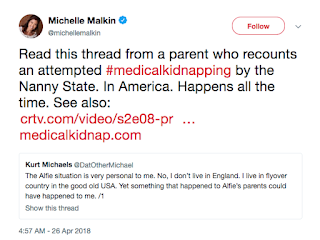 Frightening people on the back of the Alfie Evans case? You got it: “Read this thread from a parent who recounts an attempted #medicalkidnapping by the Nanny State. In America. Happens all the time”. Medical Kidnapping. And Michelle Malkin is a well-known pundit. 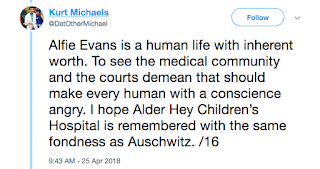 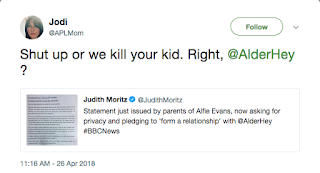 There was much worse: “I hope Alder Hey Children’s Hospital is remembered with the same fondness as Auschwitz”. Likening Alder Hey to Auschwitz. Alfie’s parents put out a statement trying to calm some of their fans. The response? “Shut up or we kill your kid. Right, @AlderHey?” Allegations of blackmail against the hospital. 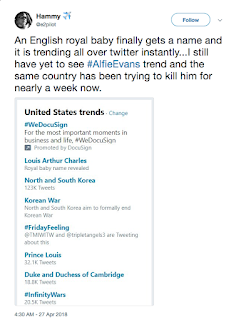 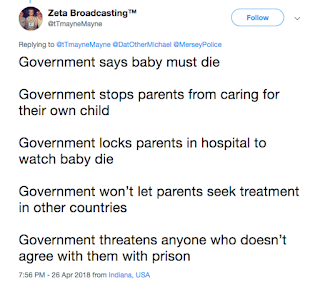 On it went. “An English royal baby finally gets a name and it is trending all over twitter instantly...I still have yet to see #AlfieEvans trend and the same country has been trying to kill him for nearly a week now”. Country trying to kill him. “Government says baby must die Government stops parents from caring for their own child Government locks parents in hospital to watch baby die Government won’t let parents seek treatment in other countries Government threatens anyone who doesn’t agree with them with prison”. 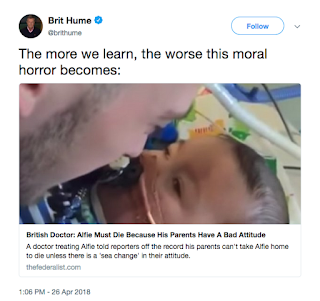 Government paranoia (and several untruths). This tendency spread to those in positions of responsibility in the media: “The more we learn, the worse this moral horror becomes” told Brit Hume, a senior political advisor to Fox News Channel (fair and balanced my arse), who was quoting a wildly exaggerated and misleading source. Moral horror. 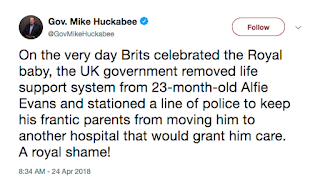 Mike Huckabee, a former Governor of Arizona and wannabe Presidential candidate, was no more knowledgeable: “On the very day Brits celebrated the Royal baby, the UK government removed life support system from 23-month-old Alfie Evans and stationed a line of police to keep his frantic parents from moving him to another hospital that would grant him care. A royal shame!” Government removed life support.

And Laura Ingraham, another Fox News host, and under fire for viciously smearing students who have protested against school shootings, was equally ready to show some responsibility. Or maybe not: “Tonight @realDonaldTrump could perhaps save the life of #BabyAlfie — @10DowningStreet, do you have no shame? Starving a child to death”. You read that right. 10 Downing Street starving a child to death. And manipulating a tragedy to talk up Combover Crybaby Donald Trump. On Rupert Murdoch’s cable news outlet.

That two ordinary people have been consumed by tragedy, and are now consumed by grief, has been lost in the tsunami of misinformed anger and righteous hatred. Alfie Evans’ parents have been mere pawns in an ideological game. That’s how sick it has become. Farewell, Alfie Evans.

If there's one country on this planet who cannot lecture anybody about anything it's the warmongering, mass-murdering, gun-mad, racist, loony spiv oligarchy that is the USA. A country whose establishment knows the profit in everything and the value of nothing. A dreadful place with far right mainstream media even worse than ours - though at the current rate ours will soon catch up and pass them.

John Freeman, ambassador thereto 1969-1971, once said of the USA, "Their souls are mortgaged to the psychiatrists." At times like this you realise even that was an understatement.

No-one could fault the parents for fighting for their child no matter how badly they conducted their campaign but the ghouls who jumped on board were a disgrace. As for attacking the hospital and staff that was beyond the pale. The unfortunate fact is other parents will be going through the same trauma and every day in Britain relatives must make the heart rending decision of switching off life support for a loved one.

But lets not forget the media's role in promoting this matter. It was manna from Heaven for the down market gutter tabloids who couldn't get enough snaps of poor Alfie, republishing day after day and basically encouraging the deluded "Army".