The perpetually thirsty Paul Staines and his rabble at the Guido Fawkes blog like to push the idea that they are against any kind of racism, that it is others who indulge in that sort of thing - and they love to mock those who get taken in by racists and other hoaxers. So this morning they find themselves in one of those Very Difficult Positions after one of the group blogs they love to promote has been caught doing just that. 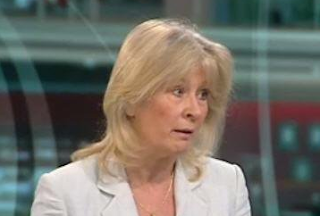 Always present in the Fawkes blog’s “Seen Elsewhere”, with two mentions right now, is the insufferably tedious Conservative Woman, co-edited by the terminally boring Laura Perrins, and Kathy Gyngell, occasional journalist and advocate of patently ridiculous ideas like preventing the use of currently illegal drugs completely. That’s an interesting position for someone out there on the libertarian right, but hey ho. 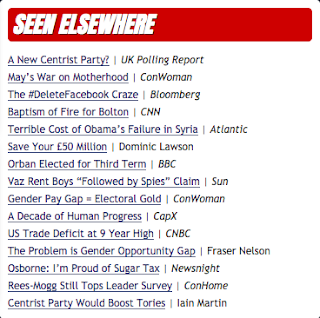 Worse, Ms Gyngell has now been caught endorsing an infamous racist, even though the person whose actions prompted that endorsement has apologised for them. What happened may be put directly: Andrew Martin, who writes for the Conservative Woman as well as Spiked (so titled because it should have been long ago) picked up on a Tweet attacking shadow home secretary Diane Abbott.

Without checking whose Tweet he was endorsing, Martin seized on a supposed poster featuring Ms Abbott and the comment “A black MP tells blacks she'll put them first. Awesome … Now imagine a white MP saying he'll put whites first”. The “poster” was a hoax. But off went Martin. “There's one 6-letter word for this poster from Diane Abbott. It begins with R, ends in T and the third letter is C”. Subtlety? Fer-fer-fer-forget it. 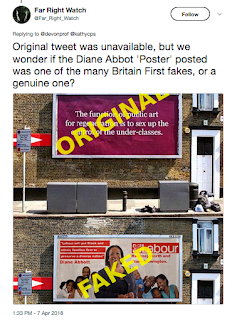 Far Right Watch smelt a rat: “Original tweet was unavailable, but we wonder if the Diane Abbott 'Poster' posted was one of the many Britain First fakes, or a genuine one?” Martin now realised his mistake, and said so directly. “We now know the origin:Joshua Bonehill, convicted racist, 2/3 years ago. There are plenty of legitimate criticisms of @HackneyAbbott. She has a right that we lay off unfair ones. I apologise for being taken in”. Joshua Bonehill Paine, eh? There’s a name to go nowhere near. 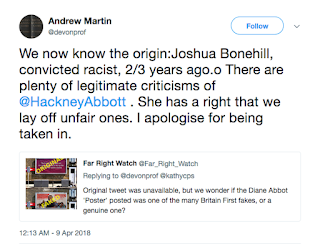 But Far Right Watch had another question, after thanking Martin for his prompt action. “Thank you. We know Bonehill - we were among a handful who highlighted his activities and helped put him away. Wonder if @kathycps will also concede and retract her RT. Unlikely, we think. It would take integrity”. And so it came to pass. 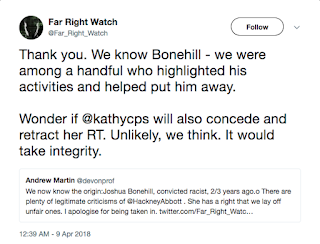 Kathy Gyngell’s endorsement of Martin’s original - and now admittedly mistaken - Tweet is still there at the time of typing (1010 hours). From which one can only conclude that she agrees with the sentiment that Ms Abbott is a racist, which she is not. The Conservative Woman likes to promote an aura of righteousness. It’s only a pity that it doesn’t accompany that with a modicum of principle.

Also, The Great Guido has backed another highly questionable enterprise. It’s almost as if they aren’t really concerned about actual racism, isn’t it? Just a thought. 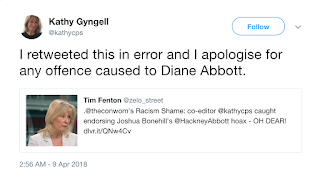 "I retweeted this in error and I apologise for any offence caused to Diane Abbott" she has told. One sincerely hopes the recantation doesn't only happen when she gets caught]
Posted by Tim Fenton at 10:26

In present use of the phrases, "libertarian right" is an oxymoron, as is "neoliberalism" and "progressive conservatism."

These are Luntz-type invented lies and bullshit meant to persuade naifs that right wing politics is the opposite of its actuality. Which is theft of national assets for the rich, bribery of useful idiots, racism, blaming the victims, warmongering and monopoly ownership of media.

Orwell knew what was coming when he invented Newspeak. Well, there it is in those phrases, all dull eyed and full of shit. Right wing monopoly media pump it out like the sewage and bilge it is.