After the 24-hour rolling news Speculatron ran out of steam over things to say about last week’s London attack, our free and fearless press has turned, slowly but surely, to the upcoming notification by Theresa May of triggering Article 50 of the Lisbon Treaty. If the timetable is adhered to, this will happen tomorrow. So those papers backing Britain’s exit from the EU are now thinking up new ways to tell readers how wonderful this is. 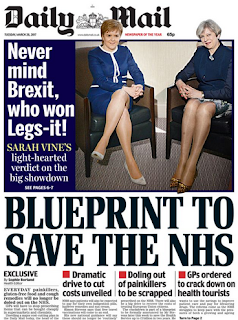 Ms May helped them by fetching up in Edinburgh yesterday for talks with Scotland’s first minister Nicola Sturgeon. This gave the hacks and pundits their headline, and lots of photos, but then a problem entered: the meeting between the two women was held behind closed doors, and only the briefest of statements was issued afterwards. This produced a news vacuum, and press nature abhors a news vacuum.

So that void had to be filled, and at the Daily Mail this meant telling readers that, whatever had been said, our not at all unelected Prime Minister had won, so there. To this end, Sarah “vain” Vine was dispatched by the legendarily foul mouthed Paul Dacre to bring forth the patently ridiculous headline “One was relaxed, every inch a stateswoman while her opposite number was tense and uncomfortable: SARAH VINE says May v Sturgeon was a knockout victory for the PM”. The supporting article isn’t any better.

How did Ms Vine reach her conclusion? It was all about the clothes, silly. “the First Minister’s natty blue suit with white piping and matching light-coloured stilettos were unmistakably reminiscent of the Scottish flag, a subliminal if not entirely subtle indication of her feelings towards Westminster … May, for her part, was stateswomanlike in a stylish navy jacket, a patterned dress and her trademark leopard-print heels”. 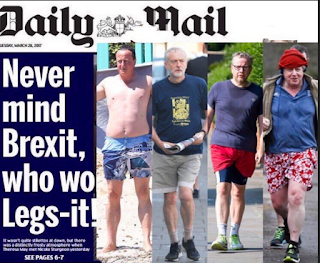 What you will not see in the Mail

Could it get worse? As if you need to ask: “Their expressions … told very different stories. May is pictured laughing all the way to her eyes, her head thrown slightly back, her chin sinking into her neck. It’s a relaxed, natural pose, her gaze confident and aimed directly at the camera … Sturgeon, by contrast, looks less comfortable. She is glancing off to one side, her eyes like two hard little chocolate buttons, her smile about as warm and welcoming as Loch Lomond on a winter’s day”. What a load of partisan tosh.

But it was about to get even worse. A lot worse. “But what stands out here are the legs - and the vast expanse on show. There is no doubt that both women consider their pins to be the finest weapon in their physical arsenal. Consequently, both have been unsheathed”. Shine a light, whatever next? Do I need the sick bucket ready?

Could be. “May’s famously long extremities are demurely arranged in her customary finishing-school stance - knees tightly together, calves at a flattering diagonal, feet neatly aligned. It’s a studied pose that reminds us that for all her confidence, she is ever the vicar’s daughter, always respectful and anxious not to put a foot wrong … Sturgeon’s shorter but undeniably more shapely shanks are altogether more flirty, tantalisingly crossed, with the dominant leg pointing towards her audience”. Oh just f*** right off. 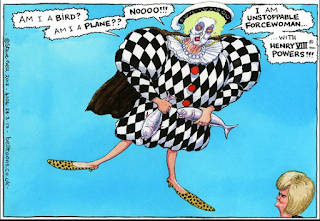 Sarah Vine knows sweet jack about what went on in that meeting, and equally little about what a posed photo of the two leaders really signifies (clue, Sarah: it signifies two leaders posing for the camera before a meeting. Nothing more, nothing less).

That did not stop the supporting acts, bringing forth increasingly silly headlines like “Never mind the referendum! As Nicola Sturgeon ditches her red power suit to mirror Theresa May's sombre look...Who won the fashion face-off at their tense talks?” from the Mail’s “style editor” Dinah van Tulleken (crazy name, crazy gal?!?) and the inevitable “'They look well past the stage of pretending to be chums': Body language expert reveals the truth behind Theresa May and Nicola Sturgeon's frosty Brexit meeting”.

The condemnation of this blatantly sexist and demeaning exhibition ranged across the political spectrum, from Labour leader Jeremy Corbyn to senior colleagues Yvette Cooper and Chuka Umunna, via former deputy leader John Prescott and former Leader Mil The Younger - Tweeting “The 1950s called and asked for their headline back” - to former Tory minister Nicky Morgan.

Yes, the article was written by a woman, and the majority of the Mail’s readership is made up of women, but this is total crap. You don’t know what Theresa May and Nicola Sturgeon said during their meeting - just admit it. Try filling the resulting space with news. Or did I misinterpret that word “newspaper”? One more for the bin.
Posted by Tim Fenton at 10:27

I see you use the revised version of the Mail shocker, now complete with up-dated "lighthearted".

I must presume this is as close as the Mail can get to a proper apology.

Even so, I'm not convinced this addition at all lessens the sexism. If anything, it trivialises even more so.

A while ago (maybe 2015/16?) the Times addressed the way female politicians and their dress sense got covered, compared to male ones. Readers had been writing in asking why the double standard.

The reply, paraphrased: "There is no double standard; if David Cameron wore a summer frock to PMQs we'd pay it as much attention as one worn by Theresa May". Trying to lighten the mood to be sure, but that's the attitude you're dealing with.

A success for Dacre's doggies as the media report on the Heil's front page instead of important matters.

That Nicola Sturgeon......Phwooaar, wot a scorcher!

But her image isn't helped by the Coyote Ugly bar staff geggin' in next to her.

"her head thrown slightly back, her chin sinking into her neck"
Can't make any sense out of that.

"Newspaper of the Year", apparently. I can only assume that the year in question was some time in the 50s.