Sugar producer Tate and Lyle was in the vanguard of businesses advocating for a Leave vote in last year’s EU referendum. And at the end of January, the firm, clearly emboldened by the result, Tweeted out a video telling “Here’s why Brexit is a golden opportunity for Tate & Lyle Sugars to grow again”. Note that no other sugar producer got a mention. Nor did any region of England. That’s because nobody else gets to benefit.

I’ll go further: Tate and Lyle enjoying that “golden opportunity” means that farmers who produce sugar in this country, along with their workers, their customers, their hauliers, and all their families are going to find themselves royally screwed by Tate and Lyle’s post-Brexit opportunism. Why that should be is not difficult to explain.

When the man from Tate and Lyle gets out his onion and complains of “eye watering” EU tariffs, and says that in a post-Brexit world, getting rid of these will mean a “level playing field” between importers of cane sugar - like them - and sugar beet producers, this means only one thing. Without those tariffs, Tate and Lyle will be able to undercut sugar beet producers, grow their own market share, and put the competition out of business. 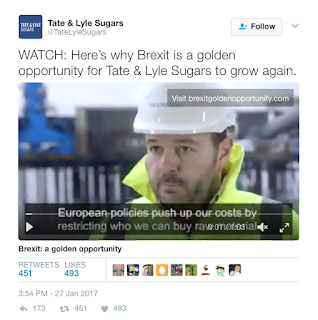 When Tate and Lyle talk of all those high quality jobs, and all that innovation, it is mere cover for expanding at the expense of sugar beet farmers, processors and distributors. This is free market economics in the raw, and no doubt all those think tanks and lobby groups who have lobbied against the hated EU will lap it up, but in a shrinking market - sugar intake per capita is in steady decline - there are inevitably going to be losers.

So who loses out if sugar beet production is hit? All you people who warned that voting to leave the EU might have less than favourable consequences will find this a delicious - and sugar free - irony. Sugar beet is produced in areas such as East Anglia and Lincolnshire. Both areas voted heavily to leave the EU. Both areas now face losing significant numbers of jobs if tariff structures are changed to favour imported cane sugar. 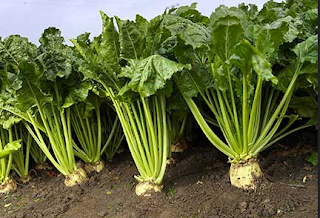 Sugar beet - under threat after Brexit

Tate and Lyle also has the potential prospect of seeing off an old adversary: the European Commission hit the firm with a significant fine back in 1998 for price fixing. Rigging the market - which is what the firm is now accusing the EU of doing - was fine for them back then, but now they are prepared to throw the other members of that cartel under the even more deregulated bus to serve their opportunist greed.

Meanwhile, those in the east of England who thought they were taking control when they voted to leave the EU will find it slowly dawning on them that it will be the likes of Tate and Lyle taking control, and the pro-Brexit voters of eastern England getting screwed over. The shysters of Leave EU and Vote Leave who managed not to tell them of the possible consequences of their actions will, of course, remain rich and unaffected.

Still, think of the freedom that comes from leaving the EU. Freedom to chase after even fewer jobs. Freedom to not take that long haul holiday because you’re skint. Freedom to buy cheap imported sugar that put your employer out of business. And freedom to repent at leisure. It wasn’t Project Fear - it was Project Reality. Still, never mind, eh?
Posted by Tim Fenton at 12:51

But hang on......if you think THAT'S a scam, wait until tory Yank chums come looking for "opportoonities." To say nothing of home grown "hedge funds" (read: hoodlums in suits) looking for yet another mug.

can I republish on my site? I think you would get much better coverage with a photo on the tweet. Someone sent me articles about Aaron Banks & friends links to sugar. Dark Money Peter BritainStays.co.uk

By all means republish the post, but please include an acknowledgement and link to this blog.