There is no better personification of the allegedly populist, but in reality, racist right-wing politics that has sprung up across Europe in recent years than Geert Wilders, whose so-called “Freedom Party” has failed to top the polls in yesterday’s elections in the Netherlands. Here was the epitome of preening Aryan arrogance, of disdain and hatred for “the other”, of at least implicit ethnic superiority. 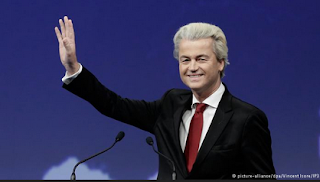 Wilders was, ultimately, beaten by Mark Rutte, a determined, committed and pragmatic politician who did not shy away from taking on those who peddled hatred in the name of “freedom”. This has presented our free and fearless press with a problem: much of the right-leaning part of the Fourth Estate, with their own agenda of using Muslim bashing as cover for crude racism, had talked up Wilders’ candidacy.

At the Mail, Sue Reid, the hack who reported from Kos on how all those poor British holidaymakers were having their Greek island breaks ruined by the influx of ghastly refugees, told readers “He says Islam is not a religion but an imperialist ideology like communism or fascism. And the Dutch, from the urban middle class to those out in the sticks, are lapping it up”. Back in February, they talked him up as a winner.

This was coupled with further fuelling the irrational hatred of the EU that is part of the iron code of the legendarily foul mouthed Paul Dacre: “Wilders's meteoric rise means the Netherlands, long famed for its liberal outlook, could well provide the next shock to the European political elite … On his agenda is a Dutch exit from the European Union and possibly a return from the euro to the traditional Dutch currency, the guilder, too”.

It was the same for the Murdoch Sun, running stories like that headlined “THE DUTCH WILL BE NEXIT Meet Geert Wilders, the Donald Trump of The Netherlands who wants to lead his country out of the EU and shut the borders to Muslims … The right-wing rebel is leading the polls for March's general election after throwing his support behind a ‘Nexit’”. In the world of the Murdoch goons, a racist bigot is a mere “rebel”.

In the event, Wilders and his party did not poll as well as all the fawning coverage suggested. Rutte will remain Prime Minister, being head of the largest party after the election. The Netherlands will remain an EU member state. There won’t be a referendum on leaving. And it will still be part of the Eurozone. All of which means the Sun and Mail will have to stack their chips on Marine le Pen winning the French Presidency.

After all, the only other great hope they have is for Alternative für Deutschland (AfD) to make significant gains in German elections later this year - but the polling suggests that is not going to happen. Why keep on talking up the racist right?

Perhaps not just papers, but also broadcasters, in the UK will stop and think - and desist from giving so much attention to our own right-wing lunatic fringe, which means mainly, but not exclusively, UKIP. Or if they do, perhaps investigate them a little more frequently than just skewering them at by-election time. Stop pandering to and promoting hatred.
Posted by Tim Fenton at 13:02

One of those times when over exposure / promotion of a candidate has been counter productive. See also Stoke by election ; now we await the defeat of Mme LePen.

Have any of our far right and hard right media (i.e. All of them) used the term "hard right" or "far right" for the Dutch Aryan peroxide blond?

I can't be arsed looking. They all look and sound the same to me.

What is a concern is the increase in votes far-right parties have experienced in the past twenty years.
From a stating point of four figures to five or six is worrying.
Remember that in the UK GE 2015 right wing parties got the majority vote.

Same happened in Australia with Rupert Morloch's News Corpse hyperventilating about the rise of the ridiculous right-wing racist, Arab hating ratbag Pauline Hanson who makes Wilders & Le Pen look like raging intellectuals by comparison but she crashed and burned in a state election last week and will do so in a Federal election in 2019 when Malcolm Turnbull will be sent packing back to his harbourside mansion.

# these racists from the loony right should all be made do a lineage DNA tracing test which the hapless Hanson did only to find her antecedents hailed from Turkey. The man delivering the results is said to have fled from the room as she turned her fury upon him
That Wilders looks a bit dark under that bottle blonde hair. What is he covering up?

I believe Wilders has part-Indonesian heritage on his mother's side.

Glad you knew that, Tim. He has a similar look to an art teacher I had at school, a mixed-race Dutch Indonesian. Isn't there a bit of a pattern here with various German Nazis having Jewish ancestry and even our dear Boris the Blimp being part-Turkish. Is it over-compensation, externalised self-loathing or simply that they're nasty little tossers, d'you think?

Equivalence of the Day: No 6 in a series

Seems like the Dutch went along with my father's warning - Never trust a man with an elaborate haircut.