The moment all those optimistic, happy-clappy, smiling, bright-eyed, bushy-tailed and, let us not drive this one round the houses for too long, utterly delusional campaigners have fought for so long to see has now come to pass: our not at all unelected Prime Minister has signed the letter that will trigger Article 50 of the Lisbon Treaty and set in train the process by which Britain leaves the European Union. 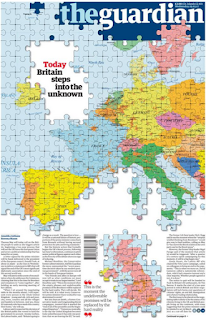 To accompany this occasion, the usual raft of bullshit sound bites has been launched: Britain will be truly global (will we trade with more countries as a result? Don’t ask), the EU will smile on us because they need us more than we need them (not true), the Commonwealth will embrace us with open arms (it won’t), and our Parliament will once more be sovereign (which it was all along). So what of the press reaction? 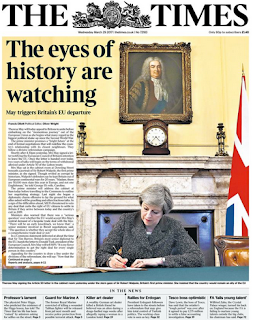 Very little of this has ventured anywhere near reality: apart from the Guardian, which has at least pitched an honest headline - “Today Britain steps into the unknown” - and the Murdoch Times, which has been granted permission not to drink the Kool-Aid and has therefore given readers the dispassionate “The eyes of history are watching … May triggers Britain’s EU departure”, that delusion has been almost complete. 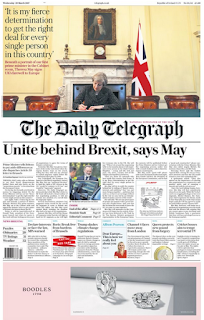 For those still employed by the increasingly downmarket and desperate Telegraph, there is no room for anything resembling the intellectual process: for them, it is a case of “do as you are told”, embodied by the headline “Unite behind Brexit, says May … Prime Minister tells Britons to put aside differences as she dispatches Article 50 letter to Brussels”. Thanks, but I’ll make up my own mind about this particular clusterf***. 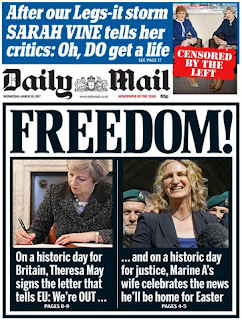 Moving from the Buckingham Palace Road bunker to that at Northcliffe House, the obedient hackery of the legendarily foul mouthed Paul Dacre (a multi-millionaire bully boy who won’t suffer, no matter how screwed the country becomes) have really been on the strong stuff, telling readers “FREEDOM”. What those readers will be freed from is another matter. But we are left in no doubt that this is “a historic day for Britain”. 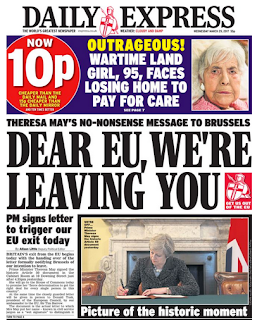 For those employed by Richard “Dirty” Desmond to churn out the Express, there is at least some relief that they can focus somewhere other than the meltdown in their chosen party, UKIP. They talk of “Theresa May’s No-Nonsense Message To Brussels … DEAR EU, WE’RE LEAVING YOU … PM signs letter to trigger our EU exit today”. She signed it yesterday evening, and the exit doesn’t take place for two years. Still, details, eh? 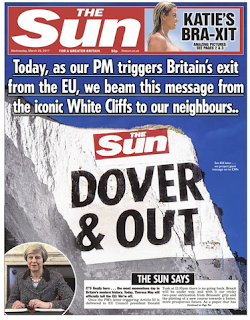 But the Pièce de Résistance was the moment of rapture for the Murdoch goons at the Super Soaraway Currant Bun, once more believing all those other 27 EU member states give a flying foxtrot what they think. “Today, as our PM triggers Britain’s exit from the EU, we beam this message from the iconic White Cliffs to our neighbours … DOVER AND OUT”. Gosh, all those on mainland Europe must be quaking in their boots. Or not.

For so much of our free and fearless press, the delusion is complete: freedom we already had, independence we never lost, opportunity that was always there, the global trade we already enjoyed. Still, there is that Vision and Boundless Hope and Optimism to look forward to. And, of course, ignoring every warning from history.
Posted by Tim Fenton at 10:19

I have never bought any of those far right propaganda rags and never will. It's too easy to take them from a supermarket shelf, quickly scan them and put them back. Their comic book format means it takes but a few minutes.

Afterwards, you're left with the indelible impression that anybody who works for their owners is nothing more than a 21st century indentured servant. People who sell their arses, not for a mess of potage but for the loss of their human common sense and decency. They become a tiny clique resentful of anybody who is a genuine free thinker in search of a better society. It helps explain the faces twisted with hatred in sociopaths like Aaronovitch, Littlejohn, Young, Dacre, Gallagher, Mackenzie, Neil, Liddle and all the other below-stairs cringers.

Which is why none of their Little Englander propaganda "headlines" are any surprise whatever. They are the Remains Of The Day made corporeal.

Well if all those commonwealth countries start to get uppity with their former colonial masters we will send out HMS Britannia as soon as they can find someone to finance building and equipping it.

It would be our replacement for the gunboats, which will be otherwise engaged searching for those damn illegal immigrants crossing the Channel.

On other matters I see our beloved press are so short of decent and honest journalists that The Telegraph are reduced to hiring Andy Coulson (on his third chance?). Sort of mirrors the Tory government's lack of credible people that they had to promote Liam Fox (his second chance?).

Now we can look forward to 2 years of headlines from the same rags micro analysing the negotiations.

However, as always, the position taken by these rags won't be about whether the actual proposals are good or bad, it will only reflect the relationship between the press and those in Authority at the time.

I d however look forward to the first 'This is NOT what we voted for Mrs May' headline in a few months time!

Both Australia and New Zealand were badly hit when the UK joined the Common Market as their import / export industries flew into melt-down. Fortunately the timing was with them as both China, Japan and most of Asia were on the rise but it took 20 years to build up the links and solid they are.
Still, Oz has been able to lend May 5 of the estimated 5000 trade negotiators she & the UK will need over the coming decades. That's inconvenient history of course.

We should all be feeling very ashamed and not-at-all triumphant.

Especially our 'elected representatives' who trod the party line and let this through on the nod.

I imagine a lot of middling voters will now join the ranks of those who say 'why bother'.

A typically wrong headed and misleading headline from the Sun as per usual. They want readers (or should that be lookers) to be under the impression that the nearest EU neighbour in France. hence the white cliffs of Dover.

Brexit is already causing all manner of problems on the Irish island. The nationalist parties have made huge gains in the recent elections. Little wonder Irish reunification is being openly talked of.

But then, easier to have a pop at the 'frogs' and others across the Channel rather than tackle issues on your own land border, eh?

Your comments about Australia/New Zealand being "badly hit" when we joined the EEC are simply not true.

The reason Britain turned to Europe was because these countries' purchase of British goods was in decline.

Why else do you think Gough Whitlam went on record during the 1975 Referendum to say there was no issue with Britain's EEC membership?