Acts of terrorism taking place in Britain are universally agreed by our free and fearless press to be A Very Bad Thing. Moreover, the same kind of thing across mainland Europe, in the Middle East, in the USA, or indeed anywhere else is also A Very Bad Thing. So it follows that security agencies across the world sharing information and otherwise cooperating with one another is to be applauded and encouraged. 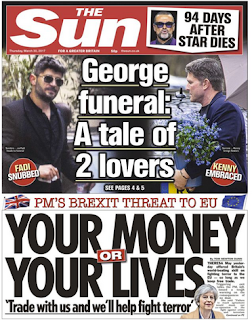 Or rather, it was: after our not at all unelected Prime Minister hinted in her letter triggering Article 50 of the Lisbon Treaty that we had a good relationship with the EU on security matters, and it would be a pity if something were to happen to it, those in Brussels, and indeed across the EU 27, expressed dismay at the idea that she would use the threat of pulling security cooperation in order to strong-arm the EU into giving us a better deal.

But this thought was not allowed to enter at the Super Soaraway Currant Bun, where the Murdoch goons put Theresa May’s threat on their front page: “PM’s Brexit Threat To EU … YOUR MONEY OR YOUR LIVES … Trade with us and we’ll help fight terror”. There you have it in one: it’s OK for the UK to become a rogue state, fine for the streets of EU capitals to be the scene of a few mass murders. And there was more.

“THERESA May yesterday offered Britain’s world-beating skill on fighting terror to the EU - so long as we keep free trade … Triggering exit talks, the PM issued a tough warning on the consequences of no deal … She said: ‘Failure to reach agreement would mean our co-operation in the fight against crime and terrorism would be weakened’ … controversially, she placed Britain’s security know-how at the centre of any negotiations”.

Once again the delusion is all too apparent: we have our security apparatus, as do other EU member states, in particular France, Spain and Germany. But because WE’RE BRITISH and our side SPEAKS ENGLISH then WE ARE BETTER THAN THEY ARE. On what basis does the Sun make its assumption? From the use of which performance metrics? But that is not told. Instead, an equally delusional editorial applauds Ms May.

“THERESA May’s historic Article 50 letter and Commons statement were a pitch-­perfect overture to the EU: reassuring and generous but with a flash of steel … We hope the EU responds in a ­similarly benign spirit and with less of the intransigence it has shown so far”. There has been no intransigence, merely the following of correct procedure. Do go on.

“Mrs May’s challenge is to be as tough, if need be, as the German Chancellor is … Which is exactly why the Prime ­Minister would be crazy not to use our peerless anti-terror security services as a bargaining chip … Some critics may be disgusted at her intention to tie in the free trade deal we want with our spooks’ continued co-operation with counterparts on the Continent … But Brussels wouldn’t hesitate to do it if the boot was on the other foot”. No citation, and none will be forthcoming.

The Sun’s delusion extended to “Mrs May was RIGHT to challenge the EU to join Britain in championing free trade”. Hello Murdoch doggies! The EU already champions free trade. It’s called the Single Market. You may have heard of it.

But good to see the Murdoch goons’ terrorism hypocrisy on full view. One can only marvel at the prospects of the logic gymnastics to come.
Posted by Tim Fenton at 12:25

Not an expert or anything but surely not talking to our nearest neighbours about criminal's activities, and travel, let alone terrorists, would put British lives more at risk than European ones?

Still we can always get MI-whatever to follow the orange one on twatter, to find out what's going on in Sweden (for example)

Question: How can a (rigged) "single market" be classed as "free trade"?

Shurely shome mishtake?......Sophistries aside, of course.

Why aren't those countries paying or providing their own protection?
How much is it costing us every year?
Seems an awful lot of people for how many intelligence agents to monitor?

No wonder mistakes are made.