While most pundits across the UK have been “looking over there” at all those ghastly foreigners in Brussels, and all the other European capitals that are lining up to tempt businesses to up sticks from London and relocate in time for Britain’s departure from the EU, the not always controlled chaos that is the Presidency of Combover Crybaby Donald Trump has reached what Alex Ferguson liked to call Squeaky Bum Time. 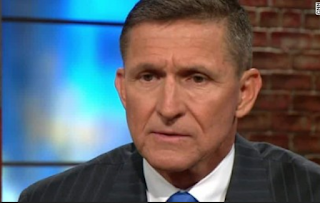 Michael Flynn - plenty to think about

The latest Little Local Difficulty for the Trump Gang is one that could see The Donald follow Richard Milhous Nixon into both infamy and oblivion: his former advisor Michael Flynn, who had to resign not just over his Russia connections, but because he managed to consistently mislead his colleagues in the administration, now appears willing to testify, presumably against his former boss. There is just one problem.

Flynn wants to have immunity from prosecution - upfront. This makes the whole exercise potentially a lot more interesting. What is yet more interesting is that the first announcement was made in the Wall Street Journal - a Murdoch title. Rupert Murdoch has thus far been an unswerving supporter of Trump, who has garnered coverage bordering on the sycophantic from Fox News Channel (fair and balanced my arse).

Fox’ breakfast offering Fox And Friends - which, note, is part of the channel’s “opinion” strand - regularly features Trump calling in and expounding his views, with those views going unchallenged. NBC News has told “Flynn's lawyer, Robert Kelner, confirmed that discussions had taken place with the House and Senate Intelligence Committees, and said ‘General Flynn certainly has a story to tell, and he very much wants to tell it’”.

The subject on which Flynn is expected to testify is, to no surprise at all, Russia. And this comes after parts of the dossier compiled by former security operative Christopher Steele on the potential for the Russians to have “Kompromat” on Trump have been confirmed as accurate. Although the Independent noted, “Russian officials have … derided the dossier’s assertions”, it also told “Some of the claims in a controversial dossier linking Donald Trump to the Russian government appear to have been verified by US media outlets”.

CNN, whose broadcasting the Trump Gang finds so distressing that it derides it as “fake news”, had earlier confirmed “The corroboration, based on intercepted communications, has given US intelligence and law enforcement ‘greater confidence’ in the credibility of some aspects of the dossier as they continue to actively investigate its contents”.

A President compromised by Vladimir Vladimirovitch Putin and his gangster cabal in Moscow? That would be bad enough; worse would be, as with Nixon, the cover-up, the spin, deceit and downright lies. That Michael Flynn is seeking immunity means we are talking indictable offences, and the thought inevitably enters that those in the frame for indictment may include others in the Trump Gang - possibly including Trump himself.

Nixon did not fall on the discovery of the Watergate burglary, or when the tapes were handed over. But fall he did. And Nixon was a consummate politician of decades’ standing. Donald Trump is just a sad old fool going through the motions.

The endgame of this Presidency may now be in sight. The dénouement will be not only self inflicted, but richly deserved, and something to savour. More later.
Posted by Tim Fenton at 10:24

Much as I'd love to see Trump gone but what Flynn's lawyers said was, "No reasonable person, who has the benefit of advice from counsel, would submit to questioning in such a highly politicized, witch-hunt environment without assurances against unfair prosecution" That's not asking for immunity. Secondly, maybe the news was released through one of Murdoch's wrinkled organs because Uncle Rupe knows there wasn't an indictable offence committed. Shame tho', mind.

The Yanks have yet to come to the conclusion that the common denominator in all of this is Rupert Murdoch. Without his Faux News (Fair and Balanced My Left One) and his active participation in the dissemination of fake news then Donnie's journey to the White House may have been a lot harder.

A direct parallel exists over this side of the pond with his New Corpse publications and their support of Brexit.

@Neil: fair point, but the lawyers have to find a justification for the immunity request that is plausible on its face.
A viable way to do that is to cast doubt on Flynn's chances of an unbiased hearing.
As an opening position "Flynn wants up-front immunity because he's pretty sure he has committed an offence" would not be quite so effective ;-)

Michael Flynn - "When you are given immunity, that means you have probably committed a crime." https://www.youtube.com/watch?v=R-UCb5rOGXo

Murdoch has probably had a hand in getting his mate Don in the Whitehouse. Nobody needs to ask why, of course!

As far as Roop the droop and the "superpower" go, probably lots to hide between them.
Well, I say hidden but not hidden from those who know.

If you know what I mean!

Another option is that Flynn has nothing new to say but is using the wish for him to testify to get immunity from anything that comes out of it.

And, if Flynn doesn't present a smoking gun then Trump can use it to discredit the whole investigation.

"That's not asking for immunity"

Oh but is is, in weasel lawyer-speak:

"advice from council" is a euphemism for "Our client is up to his neck in this, and he's sh*tting himself"

"Witch hunt" is a euphemism for "people keep bloody digging around, but we'll continue casting aspersions about the seriousness of the situation as long as the client doesn't have immunity and/or isn't in stainless steel bracelets."

"unfair prosecution" is a euphemism for "He's definitely done something wrong but we're implanting the notion that our client will have been treated unjustly in case sh*t goes south. we can't have future clients thinking we're incapable of keeping our clients out of clinky"

Flynn said it himself: Why ask for immunity if you've committed no crime?

Make no mistake, this is self-preservation mode.

My Russian granny, albeit a bit on the nutty side, always said no-one does deception better than the Russians except maybe the Chinese.
They have been supremely successful in making the USA the laughing stock of the world with their Clown president.