Following yesterday’s assault on Google by the obedient hackery of the legendarily foul mouthed Paul Dacre at the Daily Mail, and not merely by coincidence, the Murdoch goons at the Super Soaraway Currant Bun have also decided to lay into the tech giant, but only because of their public spirited desire to combat terrorism, and not because Google is nicking all the advertising revenue they think should be theirs, oh no. 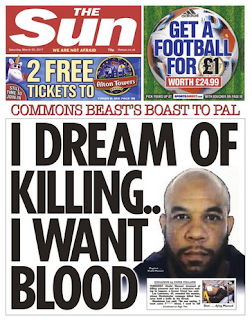 So it was that today’s Sun Says ranted “By putting profits first, Google is complicit in creating recruiting platforms for jihadis … It's bad enough that it is structured with one purpose — to pay a pittance in taxes — but Google’s refusal to stop helping the terrorists is simply an outrage”, which is as close to the Mail’s “GOOGLE, THE TERRORIST’S FRIEND” as makes no difference. And there was more.

“THE chairman of Parliament’s intelligence committee  put it perfectly: The security services have performed a miracle in protecting us from terror plots since the last attack in 2005 … Dominic Grieve knows just how many maniacs are out there trying to kill us  and how impossible it is to monitor every one of them … On any given day there are thought to be around 70 live plots. That means the security services have no choice but to prioritise who they monitor”. OK, so they missed Khalid Masood. Do go on.

“MI5 need to look at how they might have spotted the threat from him and what lessons they can learn … But instead of blaming them for that mistake we should thank them for their record of success and do what we can to help them be even better … That means everyone. Including digi giants  such as Google, whose only contribution so far has been to make things much, much worse”. And how have they done that?

“Not satisfied with leeching content and profits from the work of traditional media firms, they refuse to take down things that directly aid terrorists”. Whining about advertising revenue again. “Google put their own  profits above the fight against terror. They are complicit in creating  recruiting platforms for murderous jihadis”.

So allowing video and text content that might help wannabe jihadists is Streng Verboten, then. Perhaps the Sun hacks would tell that to the paper that said “ISIS has developed a form of ‘remote control’ to direct and encourage so-called lone wolf attacks on the West, it is claimed … Their instruction is carried almost entirely via encrypted social media … Reports suggest much of the jihadis’ communication is done via the Telegram app”.

That paper did another treacherous article that told “Masood only managed to get on to the estate because the gates were open for a ministerial vote … Commons security experts were aware it was a security weak spot … The entrance is often left open during votes so ministers can drive in and out quickly”. Who would give so many clues to apprentice terrorists? Where was this treasonous copy published?

Er, it was IN THE SUN - the SAME PAPER that has been dumping on Google for allowing the posting of terrorist related content. Except the Murdoch goons aren’t just allowing the content, they’re researching and writing it too. Hypocrisy, much?

"By putting profits first, Google is complicit in creating recruiting platforms for jihadis..."

In which case this sort of fucks James Murdoch inside out and upside down. See:
http://www.medialens.org/index.php/alerts/alert-archive/2009/578-trust-in-profit-james-murdoch-the-bbc-and-the-myth-of-impartiality.html

In which case Murdoch's yesmen might want to reconsider their "position." After all, contradicting the brat might get them sacked.

@Alan
There are plenty of ways to fuck that lot up.