The Daily Mail’s legendarily foul mouthed editor Paul Dacre has very little contact with the world that all those readers with whom he has his daily conversation have to inhabit: as a new book tells, he is chauffeured from his Belgravia pied-à-terre to Northcliffe House and back, is served his lunch on a silver platter by the house butler, and once had to ask an editorial meeting what an ATM did. And then comes his knowledge of the NHS. 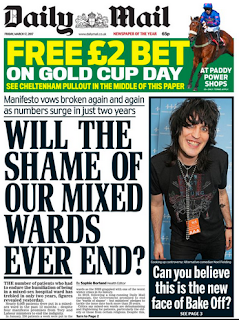 For a paper that devotes so much coverage to that subject, Dacre knows so little about it: he, as do all the Mail’s senior executives, goes private. Yet there is the Mail today, once again pontificating: “Manifesto vows broken again and again as numbers surge in just two years … WILL THE SHAME OF OUR MIXED WARDS EVER END?” thunders the headline, demonstrating clearly the Mail’s reality disconnect - and its rank hypocrisy.

Today’s Daily Mail Comment, the authentic voice of the Vagina Monologue, tells “Twenty-three years ago the Mail launched a major campaign to end the growing scandal of mixed-sex wards on the NHS”. This means it is one of Dacre’s campaigns. The piece continues “the number of incidents fell from 19,000 a year to just 2,595 in 2014/15 … But … breaches are up sharply, having trebled to almost 8,000 in the last two years”.

Who should carry the can for this? Not the Government, with Dacre’s embarrassing schoolboy crush on Theresa May continuing to cloud his judgment: “there are huge pressures on the NHS, but with billions more coming to pay for social care and free up beds there is no excuse for this indignity to continue … Health Secretary Jeremy Hunt must ensure hospital managers reverse this trend, and soon”.

It’s the managers’ fault, and look at all that extra money. But there isn’t that much extra money coming, and it does not take much application of grey matter to figure out that financial constraints on the NHS have made matter worse. Who might have been cool with that in the past? As if you need to ask: “No return to tax and spend, Mr Hammond” warned another Daily Mail Comment only last November.

One month before that, the Mail ran the headline “We're facing a cash cut, warns NHS chief: Funding drop will lead to the 'most pressurised year' for the health service but Jeremy Hunt insists hospitals can do more for less”. The article went on to tell “The NHS faces its first funding cut per head of population since the 1990s despite growing pressures … funding would drop in 2018-19 … It will be the first time the Health Service has received such a reduction since at least the turn of the century”.

In January, the paper’s deputy political editor penned “Taxes may have to rise by £1,000 per person to cope with ageing population: Spending on the NHS will need to double to £250bn a year”. Oh, and “The cost of social care will also double to almost £40billion a year”. But all the while, the likes of Stephen “Miserable Git” Glover were sneeringly dismissing the NHS as a “Sacred cow”. Not fussed about its problems then, were they?

The Mail constantly rails against taxation, but somehow expects the NHS to function independently of it. It reports concerns over spending levels, but glibly tells readers that it’s just management who need to do more for less. And now it howls about the consequences of the policies it has urged on the Government. What a set of lousy hypocrites.
Posted by Tim Fenton at 10:23

Stephen Glover told a porky: under Medicare in Australia the vast majority of patients pay no up-front fee as most surgeries "bulk bill" by recouping all their costs from the government. Patients can choose to go private and pay an 80% later refundable fee but most don't bother as the service is exactly the same. Angela Eagle correctly said the countries Glover whinged about invest far more per capita in their universal healthcare but that's not the reason the service is so much better: they haven't fallen for the privatisation scam so costs are kept down with far more money to invest in new technology.
And what's this alleged indignity about mixed wards? I've been in & out of Oz hospitals over the past 4 years and most wards are mixed and no-one pays a blind bit of notice. I mean when you are really sick you tend not to give a stuff who is the next bed.

Never mind the Daily Heil. We all know what a shithouse rag it is.

But what's this about George Gideon Osborne, late Chancellor of the Exchequer, now editor of the Russian oligarch/KGB agent owned Evening Standard?

Are we about to get "revelations" about HIS "connections" with the Kremlin and the FSB?