Few public figures provoke such diverse reactions to mention of their name as those who have made the journey from violent dissent to embracing the political process, and those who made that journey during what were, in a statement of monumental understatement, called The Troubles in Northern Ireland, are no exception. So when Republican leader Martin McGuinness died yesterday, not everyone mourned his passing. 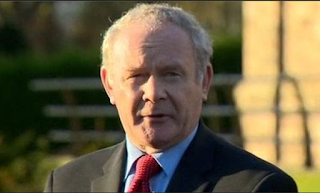 Martin McGuinness - beyond light and shade

McGuinness had grown up in Derry during a period where the Catholic and Nationalist tradition in Northern Ireland experienced vicious bigotry at the hands of the Protestant and Unionist majority. Catholics were second class citizens, denied basic civil rights, including voting rights. The abusive repression, often exercised through the Police or their hated part-time backup, the “B Specials”, eventually provoked a furious backlash.

Peaceful protests in support of civil rights were violently curtailed. Successive Westminster Governments took little notice of the problem. By the time they did take notice, the Provisional IRA had become established within the Nationalist community, paramilitary groups were organising on the Unionist side, the army was deployed, and some seriously bad ideas had been tried - like internment - only to make matters worse. 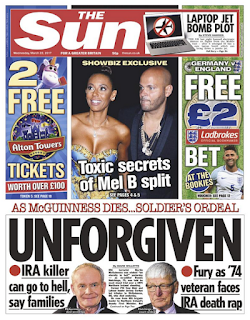 Spot the difference - the English Sun ...

McGuinness was an IRA commander and was undoubtedly responsible for many of what were collectively called atrocities: punishment beatings and murders were all too common. But he was also someone who, at an early stage in The Troubles, the Westminster Government and security forces were talking to. Then came the move by the former IRA men to end the armed struggle and make their cause a solely political one.

What happened during those years in Northern Ireland cannot be blamed on any one group, to one tradition rather than the other. It was too complex a story to simplify, and McGuinness’ journey was typical of that complexity. He took part in some terrible acts, but brought his community to the negotiating table and took on the responsibility, with the Unionist tradition, of governing Northern Ireland for the benefit of all its people. 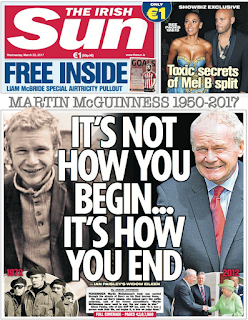 ... and the rather different Irish edition

Acknowledging that journey proved to be beyond some commentators yesterday, and has proved equally difficult for some in the press today. Typical of this difficulty is that shown by the Murdoch Sun, with its front page rant “As McGuinness Dies … Soldier’s Ordeal … UNFORGIVEN … IRA killer can go to hell, say families … Fury as ’74 veteran faces IRA death rap”. What the Murdoch goons have not told their readers is that the man who got killed was an unarmed civilian with learning difficulties.

Still, details, eh? The Sun has to be the soldier’s friend at all times, or rather in England it does. In Ireland, the €1 Irish Sun strikes a very different tone, quoting the widow of Ian Paisley, so long the “Dr No” of the Unionist tradition, simply saying of McGuinness “IT’S NOT HOW YOU BEGIN … IT’S HOW YOU END”. The supporting article begins with a one word description of the former IRA commander: “PEACEMAKER”.

The inability of our free and fearless press to understand that Northern Ireland is a story beyond tabloid simplicity is one thing. The puke-making hypocrisy is of a different order entirely. This lamentably bad journalism serves no-one’s cause. Don’t buy the Sun.
Posted by Tim Fenton at 10:45

I think you gave a balanced view point. Thank you. As a child at Catholic school when the "Troubles" began, I was aware of both sides of the argument and as you say it is far too complicated to simplify. My horror at the atrocities committed by both sides is deeply felt but I do believe that both McGuinness and Ian Paisley deserve great credit for their behaviour leading to the Good Friday agreement and their work together afterwards. It took great courage to do what they did. I do regret that there was not a Peace and Reconciliation Commission afterwards on the lines of the one in South Africa.

The Northern Ireland "problem" will never be solved until it dawns on the Unionist/Protestant community that the British establishment really hates ALL Irish with a passion beyond reason. After which, a glance at the map will tell anybody with common sense what should happen: A re-united Ireland.

Alas, history has piled on so many complications it will be easier to dismantle a trembler switch connected to a nuke. Only the Irish people, North and South, can solve the "problem." Clearly, quite rightly the Unionist/Protestant community cannot be bombed or murdered into reunification, a recognition which thankfully brought McGuinness to the conference table. But the story is very far from over until ALL the Irish recognise, not that no man is an island but they all live on the same island. Only their enemies benefit from the mayhem.

The fact is everyone in what we call Britain depends on each other for a peaceful society.

As for the Scum and its employees, I wouldn't wipe my arse with that disgusting rag or them.

All this stuff with McGuinness would be laughable if it didn't involve such a person. Calling him a peacemaker is like calling The Kaiser a peacemaker because he signed The Armistice. The only reason McGuinness and his mate went all peaceful was due to the IRA being infiltrated, falling to bits and highly lightly they would both be arrested and tried for various atrocities. So they did a deal with Blair.

As for NI being peaceful- the kneecapping, protection, intimidation etc is still going on.

I'm old enough to remember the birth of the civil rights movement and to know the army was sent in to protect the catholics. Sadly it was soon taken over my various psychos and organised crime gangs. (I include McGuinness in the latter.)

BTW I am Irish and catholic and was in Ireland when the civil rights group gained momentum.

There's a principle that Murdoch uses when utilising The Sun. What we may call hypocrisy is what Murdoch would call "addressing your audience to make the biggest buck". Give the punters what they want. It's the old Northcliffe maxim.

The principle that says only winners are useful. And he and his amoral minions will follow whichever path will wield him the most leverage with those winners in power so hedging his union bets is necessary in uncertain times.

I bet he doesn't know whether to keep supporting Trump or whether to ditch him before the that whole lot crashes down taking all his supporters with him. Fox News seem to have started to hedge their bets.

Alan
Apart from the first sentence, that was a reasoned and reasonable post. We all hope you're well.