Whittingdale - I Told You So

Once the story of Culture Secretary John Whittingdale’s dalliance with a known prostitute was out there, then the larger part of the Fourth Estate, for whom he was no longer useful, would no longer keep schtum: papers would break ranks and throw him under the nearest bus. And so it has come to pass today, with the Mail On Sunday - one of those papers that had spiked the earlier story - splashing him across its front page. 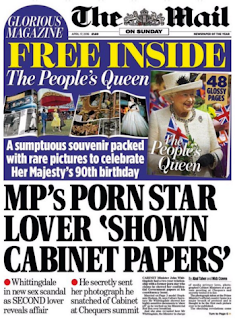 Nor does the MoS have any trouble letting the cat out of the bag: “Whittingdale in new sex scandal as SECOND lover reveals affair”. So the story reported last week at Byline Media was a scandal after all? OH WHAT A GIVEAWAY. Moreover, there it is on the front page - a revelation that could prove fatal to any ministerial career. “He secretly sent her photograph he snatched of Cabinet at Chequers summit”. Oh dear!

So that’s two public interest defences - not hard for the press once they show willing - and two potentially difficult ones for Whittingdale to explain to Young Dave, although “a source close to the divorced Mr Whittingdale insisted that Ms Hudson ‘did not have access to Government papers’”. So he says he didn’t do it, and she just looked at them.

Whittingdale told Ms Hudson in advance about that Chequers meeting. The MoS has been able to easily identify ten of those present. The potential security implications are horrendous. So is the revelation that Whittingdale is prone to lying when it is convenient to him: “the newspapers had found out a woman he’d gone out with was a prostitute. He told me it was all over long before he met me. But last week, I discovered he was sleeping with her at the same time as me, and we always had unprotected sex” tells Ms Hudson.

The contents of the MoS article alone should see Whittingdale sacked. And I have to tell him, and those who have been shouting “non-story”, that Byline Media has another piece in preparation. I said it was serious - now all can see that it was indeed serious. This is not a Hacked Off hit job. It’s not a BBC smear. It’s a real story, and its subject is now toast.
Posted by Tim Fenton at 11:04

"It’s a real story, and its subject is now toast."

Most revealing of all is that all the usual suspect Murdoch poodles still appear to be in self denial of the facts. Or possibly our "free and fearless" press are muzzled by the size of their pay packets?

In the end it all comes down to $s and £s and we know who has plenty of those. And it's a lot easier to accumulate without the bother of paying tax.

On the subject of real stories when does the Coulson book come out or has that gone the same way as Mark Hanna's proposed "revelations"?

I'm wondering what todays dead cat will be?

Not short of dead cats, are they.

Boris bleating about the potential hypocrisy of Obama.
(Dilettante poser trying to shut up an acknowledged statesman, the like of which he'll never be. Nice).

Zac G desperately trowelling on the 'sharing platforms' crap in the mayoral scrap.

Probably a scary Romanian migrant 'story' being polished as we type.

It amazes me that having been found out with Ms King, why Whittingdale put out a statement that could so easily be shown to be untrue, or rather, very inconsistent and unbelievable . I would have thought that having seen David Cameron shredded over his series of Panama "clarifications" he thinks that he can get away with it as well. Cameron has (for now) but the public trust in him is sinking. Caught out once, does Whittingdale really expect us to believe that he did not show Ms Hudson Cabinet papers?

Perhaps he should resign for being stupid?

If being stupid was a disqualifier for entering Parliament there wouldn't be very many people in it, I'm afraid.

If after this Scum and Daily Heil "readers" believe those rags are interested in democracy......well, they're just a mob of Essex "oiks."

Which is about the only thing Whittingdale got right.

Funny, though, broadcast news is still trying to avoid it through censorship by omission. Which makes the guilty even worse then Murdoch and Rothermere Nazis.

After this, Whittingdale will need a fork lift truck to get an erection.

Are Whittingdale's timings consistent? He was a cabinet minister for some of the two years he was seeing Ms Hudson, but supposedly not when seeing Ms King (Aug 2013 - Feb 2014). Yet he was two-timing. It's quite possible, but all this stuff makes me question everything.

There used to be a character in Viz called Thermos O'Flask, who would in each strip be given money to buy something or other, and then 'accidentally' wander into a brothel or S&M dungeon or whatever and end up spending the money on prostitutes.

We seem to have found the real life version!