Labour - There IS A Plot 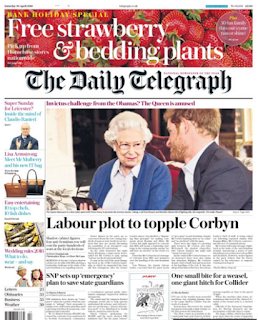 The Labour right, with its more openly disaffected whingers like John Mann, Simon Danczuk, Jamie Reed, John Woodcock and Ian Austin, has not only refused point blank to accept Jeremy Corbyn’s leadership, but has also been waging a campaign of variously organised dissent, egged on by their contacts in the right-leaning press, who are naturally overjoyed at the sight of damaging splits among the rotten lefties.

But, until now, there was no “Big Name” around which that dissent could coalesce. Those who contested the leadership last time are either part of the shadow cabinet - like Andy Burnham - or keeping their own counsel on the back benches and not going out of their way to destabilise Jezza’s position, like Yvette Cooper and Liz Kendall. The opposition to the Corbyn camp was all but powerless. That is about to change.

What Dominiczak did get right was that those looking to destabilise Corbyn are trying to frame the issue not merely as right versus left, or indeed as anything personal (although, of course, it is exactly that), but as “Labour needs strong leadership”. The message being given to the press is that Corbyn did not suspend Ken Livingstone quickly enough, although that suspension came almost as soon as Ken had inserted foot in mouth.

Also at the top of the rebels’ agenda is to warn that shadow chancellor John McDonnell covets the Top Job, and therefore by implication he must be somehow prevented from getting it. All that would then be needed would be a candidate, preferably in possession of a safe seat. The Tel does not go there, but Zelo Street will. I am reliably informed that a long-serving Labour MP has agreed to "retire early" if required.

That is because the “Big Name” the rebels are courting, and I am told is willing to make a challenge for the leadership, is not at present an MP. The challenger the Labour right is waiting for is none other than David Miliband, and the only reason he has not already returned from New York City is because the International Rescue Committee has insisted on holding him to his contract, but that may be about to change.

Miliband’s contract does not end until 2018. But I understand he is expected to leave IRC later this year. He started there in September 2013; three years on and he will be nicely placed to turn up - purely by coincidence, you understand - at Labour’s conference, just to let everyone know he is back. The drawback, of course, is that much of Labour’s new intake of members is to the left of him, and he does not do empathy at all well.

But he has cabinet level experience, and a Miliband leadership would make the press think twice about labelling the party as anti-Semitic. The problem he has is that mounting a leadership challenge will provoke a bloodbath, but that is what the Labour right are prepared to do in order to see off Corbyn. Fasten your seat belts. It’s going to get bumpy.
Posted by Tim Fenton at 15:02

Ah the prince over the water, eh? He'll lose. The members are foursquare behind Corbyn and remain deeply unimpressed by Milliband's behaviour having lost the leadership. The right really will try anything, won't they? And the establishment is rubbing it's hands with glee. Fortunately Corbyn'(far shrewder than they imagine) is more in sympathy with a public increasingly disgusted by the antics of professional politicians and media types, so his anti-establishment strategy is likely to pay off. The tragedy being that the New Labour neophytes don't see that it's the strategy most likely to save Labour from oblivion.

Would this be warmongering far-right neocon MiliD who supported the illegal war in Iraq and signed off on torture?

The Trilateral Commission is of course an international bankers club......You remember them, the ones who caused the latest depression "austerity" by thieving the world's wealth.

So......who would you rather have - suited up David Trilateralist Milliband or plain old Jeremy Corbyn?

Parachuting in someone who :-
1) Still has questions to answer about illegal rendition.
2) Has a track record of resigning in a fit of pique when he doesn't get his own way. (When the going gets tough Dave gets going?)
3) Has zero chance of winning a leadership election under the current rules.

looks a bit unhinged to me. Mind you some in Labour thought that having Jim Murphy as Scottish Labour leader would be a good idea.

Does this bunch really think the Tory dominated media would let up if Corbyn was gone?. I believe the election of Jeremy Corbyn is the only chance Labour has to define itself as an alternative government. As a tactic they are fucking idiots. Corbyn should be given 2 years to lead with full support of the party. If a new leader emerges they still have 3 years to dominate.
These sleazebags should just piss off and join the Tories as their undermining of Corbyn undermines the entire Party. I'd be ruthless and drag the likes of Dancsunk and the moronic John Mann out by the scruff of their necks and deposit them in the gutter. They are traitors to every party worker that does the hard slog to get these nitwits elected.

It's a sad day that a bunch of non-entity MPs set out to destroy a leader so openly. I've watched these tactics now in Australia beginning with the demolition of Kevin Rudd and each PM since in both parties. It's electoral suicide and has torn both parties apart. Now Oz Labor is united behind Bill Shorten (even though many would prefer another leader) and he has a 50/50 chance of winning the General Election because the party is united again while Malcolm Turnbull's huge popularity has plummeted with former PM Tony Abbott openly undermining him.

Just seen the new leader of Lib Dems on T.V.

Didn't the Danczuks have a pop at then leader Ed Milliband during "bacon-gate" as a dodgy ruse to promote themselves and their doomed deli? I recall their suggestions of getting bacon baps out to much post-modern feminist mirth. Really classy.
Some commentators at the time felt it was a bit nasty and, dare I say, anti-Semitic in tone.

Consensus and Corbyn camp trying to unite and push the Bitterites to one side. The Bitterites feel they have to go full-throat or their candle will simply burn out if the Cruddas tyoes and the Corbyn clan unite. So indeed they are plotting to try and do exactly as you suggest. If the Consensus aim works quickly enough, it might stop a coup, but would still provide for an almighty shake-up with Blairites faced with having to sit out four years as passengers or resigning/changing party.

Speed is of the essence for the Consensus aim, Bitterite option to try and slow them up in order to keep coup hope open.