If anything were to stand as an example of the corruption and hypocrisy of so much of the press, it would be their attitude to sex stories. While the small matter of Culture Secretary John Whittingdale and his potentially dangerous more than year-long liaison with a known prostitute is kept out of the papers - as he’s useful to their cause - the tabloids are screaming blue murder about another sexual adventure they cannot report. 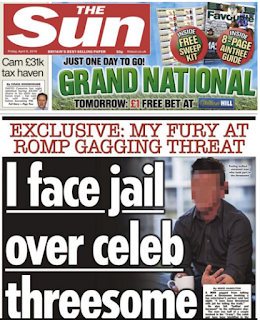 Why does this matter? That can be put directly: the complaints being made by some of the press establishment about the Whittingdale revelations are that there is no public interest defence to running the story, and that it’s mere prurience. Meanwhile, today the Sun and Daily Mail are champing at the bit to tell a story that has no public interest defence, because it is about mere prurience. Spot the difference.

But the man who the Mail and Sun are so desperate to unmask is just a “Married celebrity father” whose partner is a “Top entertainer”. That has not stopped the Super Soaraway Currant Bun whining “Yesterday there was growing anger over the fact the name had come out in a country of America’s 319 million population while the public here is kept in the dark”. Who gives a crap? We all know who it is. 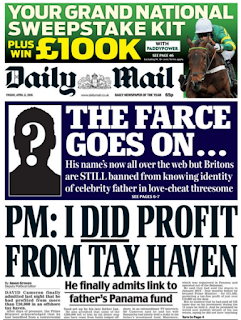 But do go on. “The outing of the couple in the States comes after two Appeal Court judges overturned another judge’s decision not to grant an injunction to the married celebrity couple … This stopped The Sun on Sunday publishing any story about the couple who were referred to by The Court of Appeal as ‘PJS’ and ‘YMA’”. It stopped the Sun on Sunday selling more papers. That is what is also driving the Mail’s indignation.

Publishing an article from the USA with all the bits that we cannot see blanked out, the Dacre doggies carp “Love cheat celeb's name is all over web, making a mockery of UK ruling … The identity of a well-known personality who cheated on their celebrity spouse became common knowledge on social media yesterday – in a mockery of a legal ban on British media naming them”. It’s not fair, right?

The Mail even wheels out unfunny churnalist Richard Littlejohn to blame Europe and Leveson, claiming that if we leave the EU, it won’t happen again (er, no). Censorship is terrible, innit? Except that it’s OK for the press to close ranks and spike any story that might show up their pal Whittingdale. That kind of censorship is just fine. The kind of censorship that the press can control is quite acceptable to them.

I give you our free and fearless press. No, don’t laugh. You’ll hurt their feelings.
Posted by Tim Fenton at 10:41

These injunctions have exactly nothing to do with the EU. It won't stop the usual Euro-myth though.

And what the right of the Mail's English readers to know about its fake interview with the grieving mother who had recently lost most of her family?
If an injunction to hush it up had had the remotest chance of success, Dacre's lawyers would have been straight round to the High Court.

It would be funny if it wasn't so tragic, Tim.

Jobsworth "journalists" and employees involved in churning out the hypocrisy, lies and propaganda are every bit as guilty as the neocon politicians who've turned this country into a Batista-type gambling centre of corruption and organised crime.

They have been crucial in helping to create a viscerally divided nation. And a divided house cannot stand. Sooner or later the chickens will really come home to roost.

Not of course that it bothers Murdoch and Rothermere for one second as long as people are foolish enough to buy their disgusting muck in papers or broadcast media. Cut that jugular vein and the two of them would be dead in minutes.

I can feel a fine line being drawn from Murdoch to Sunday Times through to David Aaronovitch coming on. But it wouldn't be a conspiracy, oh no!

Oh the irony. You can almost taste it!

Wouldn't it be amusing if it was everyone's favourite submissive Mr Whittingdale who got the gagging order? I believe gags are used by Miss King when she demands abject subjugation......

Just a small point: I have no idea who this "celeb" is, nor do I give a flying f*ck. I doubt I'm on my own

I'm with Dave - though I did curiously try and see if an internet search would tell me.

It didn't, so obviously not quite so easy to idly find out.