As breakfast TV aficionados may have noticed, the team at ITV’s offering Good Morning Britain has recently been augmented by the presence - for three mornings a week, at least - of former Screws and Daily Mirror editor Piers Morgan, who, it is not giving away any secrets to say this, has a Print Media Establishment background, with fierce loyalties to his many friends in that arena. So ITV knew who they were hiring. 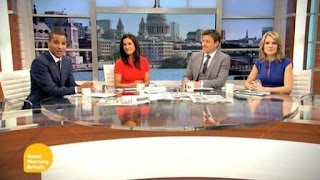 And so it came to pass that Morgan’s latest Monday morning shift with co-host Susanna Reid was pitched into brief but fierce debate after press regulation reform campaigner Evan Harris appeared on the sofa. Harris and his colleagues at Hacked Off are disliked intensely among many of the Print Media Establishment for their suggestion that press regulation should be made properly independent.

Evan Harris pointed out to Morgan that the kind of injunction he was railing against was used by his pals Rebekah Brooks and Andy Coulson to conceal their affair. Piers hadn’t had any problem with that, had he? It was this that wound Morgan up to the point of bursting. It got worse: Harris then reminded Morgan that the Mirror, under his editorship, had been involved in phone hacking on a significant scale.
The Hacked Off man surmised that Morgan was either incompetent, or had been complicit. By this time, former Lib Dem MP John Hemming, the other participant in the debate, had been forgotten as a desperate Piers Morgan accused Harris of having demanded that the press run the John Whittingdale story for a fortnight (wrong and wrong), insisting that there was no public interest aspect in that story (and thrice wrong).

Hacked Off issued no press release before Brian Cathcart was invited on by BBC Newsnight to comment. This was after Byline Media had run two articles on the Whittingdale story, Zelo Street had covered it in several posts, Private Eye had done a full page feature, and Newsnight had run its own report. There were several public interest aspects pointed up by all of those. Piers Morgan is plain flat wrong.

Normally unflappable, Morgan ended the encounter actually looking shaken (give or take the odd parting insult at Evan Harris), as Ms Reid was forced to intervene - I suspect the GMB team had given the signal to forcibly end hostilities - and save his blushes. It’s not a good look to have to make a repeated and dishonest allegation against a guest in order to shut them up, and that is what it looked like.

But neither Morgan, nor those who run GMB, can have any complaints. Free speech, which the press says it favours, doesn’t half wind up its pals sometimes.
Posted by Tim Fenton at 12:54

Minor edit: John Hemming, that "other participant" is technically a former MP and a LibDem (of slightly quirky libertarian tinge)

Is the Labour MP John Hemming any relation to the former Lib Dem MP of the same name?

Piers defence of those at the Sun because he knows they have him by the balls and vice-versa.

They could hang each other.

Piers has got away with stuff very lightly.

I told that Evan Harris straight.

He's a ridiculous little man and a hypocrite. Not that I'm any of those things.
You should have seen me go when the cameras were off.
I told him that I would get him in the carpark if I could persuade Susanna to hold him still whilst I hit him!!!

Might be interesting for some journalist to do a GENUINE investigation into the sale of the Mirror to Trinity.

Alert readers will recall this scam was carried out after Heseltine announced the closure of the British mining industry with the immediate loss of 30,000 mining jobs and tens of thousands in its support economy. Thus confirming everything Scargill had forecast, plus the economic destruction of swathes of Britain.

The Mirror, suddenly converted, immediately ran a front page banner headline of ROTTEN TO THE CORE. Which was an accurate description of the tories, their supporters and their media. The sale quickly followed.

Morgan was appointed after the sale was completed and despite his appalling employment record as a Murdoch jobsworth.

All of which helps explain why British media is not only NOT independent but is actually corrupt. ROTTEN TO THE CORE in fact. Which makes Morgan just another paid mouthpiece.