Right now, the domino effect is taking hold within the world of the media establishment and its hangers-on over recent hatchet jobs on Byline Media, the attempts to link that site to campaigning group Hacked Off, and the smearing of one Eric X Li, one of Byline’s backers. The first example of the domino effect was when the Daily Mail admitted their claim that funding a Byline contributor was not the same as funding Byline itself. 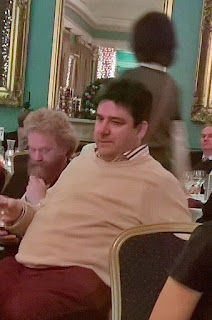 Behold the arbiter of truth and decency

That admission knocked over a key defence being mounted by the Sunday Telegraph, after Andrew “Transcription Error” Gilligan’s hatchet job last weekend was subjected to serious ridicule. In turn, the Tel has rowed back on its claim that Li “wrote regularly for The 4th Media, a website promoting anti-Western conspiracy theories and supporting authoritarian regimes”, because Li has never written for The 4th Media.

The site is an aggregator, copying and pasting from all manner of other media outlets. So the Tel changed Gilligan’s article to read “Articles by Mr Li are published on 4th Media”. This has produced the second example of the domino effect, as by making its correction, the Tel has knocked over the main thrust of a subsequent hit piece by the perpetually thirsty Paul Staines and his rabble at the Guido Fawkes blog. 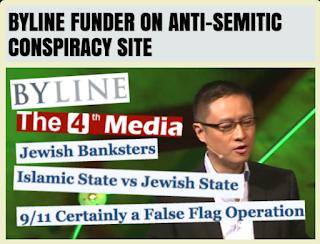 The Fawkes mob used Gilligan’s claim about Eric X Li to smear him as an anti-Semite. To this end, a photo of Li was overlaid with the logos of Byline Media and The 4th Media, together with the quotes “Jewish Banksters”, “Islamic State vs Jewish State”, and “9/11 certainly a false flag operation”. The intention is clearly to suggest that Li is the author of those sentiments, or that this represents his views.

... and here's the rest, in case deletion is attempted

The 4th Media, as Richard Bartholomew has pointed out, has copied and pasted articles from “the Daily Mail, the Spectator (an article by Peter Hitchens), and… erm… the Daily Telegraph. Clearly, The 4th Media pirates whatever material takes its fancy, including any copyright notice that may have been in the source”. Perhaps the Fawkes rabble would like to try and connect those three titles to its suggestion of anti-Semitism, or maybe not.

Rowing back from Gilligan’s article has not only shown that the Telegraph brand has fallen a long way from the time when it could be regarded as a paper of record, but has also exposed the Fawkes folks as puppets of the media establishment, ready to join the feeding frenzy, but equally disposable when push comes to shove. As can be seen, their post making arguably defamatory suggestions about Eric X Li has been screen shotted.

Defaming media-savvy millionaires for a bit of fun was always going to be a risky business. The Great Guido may have just taken one risk too far. Another fine mess, once again.
Posted by Tim Fenton at 14:26

More than anything, what this demonstrates is just how irrelevant print media is becoming.

Sooner or later it will become as useful to modern life as quill pen and cartridge paper.

So too will the current version of broadcast news.

There will be only a few ways left open for control of the news flow a la Winston Smith. One will be outright fascism, another will be suspension of Habeas corpus. We are well down the road toward both.

You need only assess the possibility of power for dangerous utter morons like Donald Trump and Boris "Herman Goering" Johnson. Or the election of the Bush Texas dynasty of far right loonies.

The examples quoted in this blog are merely a symptom, but they are a valuable illustration of the deluded notion that any Western country could not possibly go as mad as Germany in 1933.

Don't kid yourself we're better than anyone else. The last generation has shown we can be a great deal worse and more corrupt.

Sting and the police said...

Guido in a domino line.