So Farewell Then Ken Livingstone

The row over anti-Semitism in the Labour Party - which started when the perpetually thirsty Paul Staines and his rabble at the Guido Fawkes blog discovered two items in Bradford West MP Naz Shah’s social media history, from before her election last year - would have fizzled out after a period of suspension, but one act of unforced idiocy ensured that the party would suffer maximum damage and the row would rumble on. 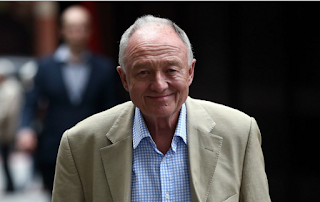 Former MP and two-term London Mayor Ken Livingstone did not have to make any media appearances yesterday. Nobody from Labour HQ leaned on him to represent the party to broadcasters and newspapers. There was no pressure on him to say anything, far less to discuss alleged anti-Semitism by bringing the Third Reich into the debate.

All the good work he did as Mayor was erased at a stroke. The Tories’ nasty dog whistle campaign against Sadiq Khan was instantly forgotten. David Cameron’s defaming of Suliman Gani under the cover of Parliamentary privilege was washed away. The Tories’ chances in next week’s local elections were suddenly enhanced.

Labour’s woes were compounded by the presence of self-promoting creep John Mann, who very deliberately used the occasion of Livingstone’s idiocy to to advance the cause of Himself Personally Now. Some observers claimed Mann was unaware of the phalanx of cameras and reporters. But he knew exactly who was there, what he was saying, and the effect it would have. And he is so desperate to kick the current leadership that he is prepared to damage, and if necessary, bring down his own party.

Cameron will not be able to believe his good fortune. Earlier in the week, after the Hillsborough inquest verdicts, Andy Burnham gave an impassioned speech in the Commons, indicating the need for the second part of the Leveson Inquiry, on the relationship between the press and the Police, to go ahead. His work may have been in vain after Livingstone’s crass stupidity allowed Cameron, more frightened than ever of the press establishment, to wriggle off the hook yet again.

There can be no way back now for Livingstone. He has been suspended from the Labour Party; expulsion must surely follow. Unlike Naz Shah, who has won the support of many Jewish voices, and shown sincere regret for her past comments, Ken will not, and indeed probably cannot, follow suit. He has proved congenitally unable to say sorry in the past, and that is unlikely to change now. His political career is over.

That has left London’s current and increasingly occasional Mayor Alexander Boris de Pfeffel Johnson off the hook, after his own dog whistle against Barack Obama, to present a bizarre sight as he tours the studios proclaiming his own virtue while laying into Livingstone for being racist. It also enables Bozza’s media pals to burnish his image, while most Londoners are beginning to see what a disaster his Mayoral tenure has been.

Livingstone was a way better Mayor than Bozza. But that does not forgive his needless and totally unforgivable outbursts yesterday. So there he goes, on his way … out.
Posted by Tim Fenton at 09:49

Ken Livingstone had to go. But it's typical of the tenth rate charade of "democracy" in this country that he has to go for a lazy and offensive PR gaffe and stupid misuse of words and history.

Nobody with their honest head screwed on believes for second that he's anti-Semitic, though he IS anti-Israeli government policies - and quite rightly too - for its mass murder and oppression of Palestinians.

Moreover, he should have known how Britain's extreme right wing media (that is, all of it) would use the situation to smear, particularly after the Hillsborough Inquest has exposed them for the cowards and liars they are. In that respect this has been very convenient for card carrying neocons.

In addition it was a racing certainty New Labour gobshites like John Mann would pile in with Doc Martens laced up. Does anybody REALLY think he "didn't see" all those TV cameras and soundmen surrounding him and Livingstone during what was an obvious fraudulent media ambush? If anyone "lost it" it was the finger pointing, bellowing thug Mann. He should go too.

Then we get New Labour Burnham rushing in with other opportunist boot boys to mark out his latest leadership bid. You would have thought he would've learned better after Hillsborough.

And let nobody EVER forget the worst mass murdering anti-Semitism in history has been concocted and acted out by the insanity of far right politicians and their apologists in media. It is they who have and always will have a "problem," not the Labour Party.

Livingstone acted like an idiot and deserves to go. But I can list an awful lot of "journalists" guilty of far worse than any foolishness of his, the very hypocrites and liars who now seek to perpetrate a "crisis," who wouldn't know the truth if they tripped over it coming out of a meeting with the Nazis Murdoch and Rothermere.

I hope Jeremy Corbyn finally realises just what he's up against in the establishment and its bought-and-paid-for media scum. You have to take them on, get right in their corrupt faces and show them up for the lying cowards they are. He could learn from the Hillsborough families how to deal with them. If the so-called "New Politics" are to have any meaning at all it should be that we are dealing here with real, marrow-deep evil.

Livingstone too forgot that. And accordingly, properly, has to pay the price.

"didn't know the press were there"... what he couldn't see the huge number of cameras just outside of the tv studio and who then follwed him into the studio while he continued to make a total arse of himself deliberately to damage Labour in the run up to the elections. It was also interesting to note that all the usual suspects let loose with a coordinated twitter attack, again intended to damage Labour and Corbyn. Corbyn should be putting a rocket up their backsides and telling them to shut the fuck up or, if they can't, put up and make the challenge or fuck off.

I didn't realise it was John Mann - I thought it was Ronnie Pickering!

Guess who one of the "guests" was.....that's right, Toby Jug of the Spectator Der Sturmer! Obviously The Jug has been to the same BBC arm-waving trained dog school as the moron Norman Smith and Laura Kuenssberg, all supposed to suggest "dynamism." Actually, he (and they) only looks and sounds like your average hate-filled fishwife gossip. That's apart from his usual line of ranting righty loony bullshit.

Neil of course wants to give "legs" to the neocon propaganda. Which is all he's been bought for.

Did Toby Young mention when he was accused of Antisemitism? He wrote about it here http://www.thejc.com/comment-and-debate/comment/119881/my-misguided-mis%EF%AC%81ring-joke

He had likened Theresa May to an Israeli tank commander firing on Palestinian children for throwing stones. Ironically he was sticking up for the fanatical Zionist Michael Gove at the time.

Personally I don't think the allegations against Ken had any more merit than those against Toby Young.

Now, does out mean in or in mean out ?

I get those two mixed up too.

You are writing off a man who has almost made a career of being written off.He is assured of a post 2020 position.

It's a fantasy to think the media will somehow stop picking off Labour identities one by one. It's Ken today but it will be someone else tomorrow. Kowtowing to them and telling the likes of Livingstone to zip their mouths is exactly what they want and what the vile Blairites and lightweights like John Mann want.