Zap! Pow!! Dull!!! But this is more about the Sun throwing a mardy strop at its loss of sales: “Despite the figure and their spouse being named in the US, a bizarre Court of Appeal ruling stops them being identified in this country … Speculation about the names is easily accessible on the internet and analysis for The Sun estimates ten million users have seen it”. What analysis? That might not impress the appeal judges.

Still, on they rant: “The Sun will be returning to the Court of Appeal next week to challenge the injunction after an outcry led by MPs”. Just the two MPs, and one of them is Philip Davies. This gives the impression, as it’s no more than prurience, that there is no public interest defence to the story and that the Sun is running it out of sheer spite, or perhaps that should read vindictiveness. But the hacks claim it’s about free speech. 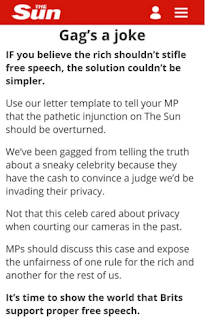 Indeed, an editorial today tells “We’ve been gagged from telling the truth about a sneaky celebrity because they have the cash to convince a judge we’d be invading their privacy … Not that this celeb cared about privacy when courting our cameras in the past … MPs should discuss this case and expose the unfairness of one rule for the rich and another for the rest of us … It’s time to show the world that Brits support proper free speech”.

Fine. Now explain why the Sun, despite its love of prurience, has not gone anywhere near the story of Culture Secretary John Whittingdale and a known prostitute, a liaison that lasted well over a year, and which involved the woman concerned, Olivia King, being invited to a number of events including one at the Houses of Parliament.

Explain why the Sun has managed not to cover this story, despite the paper also loving a good gangster yarn, and Ms King seeing one at the same time as her relationship with Whinttingdale was in progress. The kind of gangster who drives around with a machine gun in the back of his car. Where’s the Sun’s appetite for free speech then?

The answer is that the Sun, like so many titles, has an appetite for free speech only on its own terms, when it wants to flog papers and wreak revenge on Slebs who step out of line. Otherwise the readers have to look elsewhere if they want to find the truth.
Posted by Tim Fenton at 17:10

I have to say I pissed meself laughing at this line:

That Nazi rag, and its owner, employees and readers wouldn't know free speech if the tripped over it as they came off a line of coke while having a tattoo done in conjunction with body piercing.

Ha! Below the comments there's an advert for sustainable coconut oil.........

Guido has published all the sordid details.