After Murdoch pundit David Aaronovitch made a fool of himself peddling the absurd conspiracy theory that Labour’s deputy leader Tom Watson was somehow behind the Byline Media revelations about Culture Secretary John Whittingdale, it might have been thought that he would stop and think before opening mouth and inserting boot once more. But today has brought the news that this thought would have been misplaced. 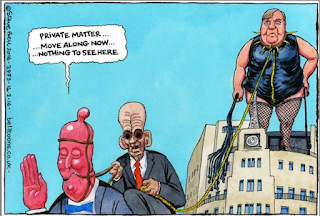 Today, to great fanfare, and with the drooling endorsement of his colleagues, Aaronovitch has penned “Hacked Off argue themselves into the gutter”, arguing that “The hypocrisy of the press-regulation lobby has been exposed in their absurd complaints about John Whittingdale”. And then he sells the pass in no style at all. 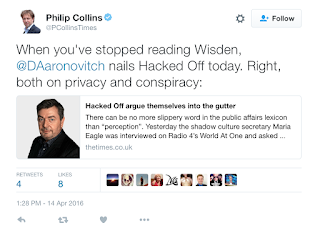 “There can be no more slippery word in the public affairs lexicon than ‘perception’. Yesterday the shadow culture secretary Maria Eagle was asked on Radio 4’s World At One why she wanted the culture secretary to excuse himself from any future decisions on press regulation. Ms Eagle cited ‘perceptions’. But was there any actual evidence that Mr Whittingdale had been or was now subject to any undue influence because of stories about his private life? Ms Eagle could think of none at all, replying instead: ‘Evidence matters more, but perceptions do matter’”, boomed The Great Man. 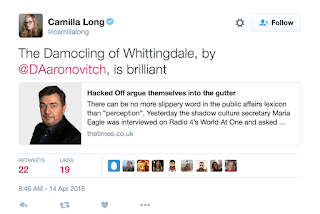 This was enthusiastically supported by Philip “Corny” Collins, who Tweeted “When you've stopped reading Wisden, @DAaronovitch nails Hacked Off today. Right, both on privacy and conspiracy”. Camilla Long agreed: “The Damocling of Whittingdale, by @DAaronovitch, is brilliant”. Aaronovitch rather let himself go as he told “Mr Whittingdale and the Protocols of the Elders of Newsprint. My [Times] column today”.

The allusion to the Protocols of the Elders of Zion - a fabricated anti-Semitic text - is more than pejorative. It tells of Aaronovitch’s sneering disdain for campaigning group Hacked Off, those at Byline Media, and all who have run with the Whittingdale story. But there is one slight problem with his swaggering braggadocio: he is plain flat wrong. 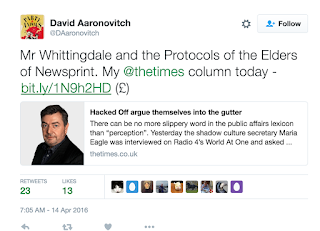 We can see just how wrong he is by indulging in the mystical art known as “five minutes’ Googling”, which brings us to the Ministerial Code, issued by the Cabinet Office in October 2015, and with a foreword by Young Dave himself. In Section 1, Ministers Of The Crown, we find Paragraph 1.2 f, which reads simply: “Ministers must ensure that no conflict arises, or appears to arise, between their public duties and their private interests”.

“Appears to arise”. In other words, Maria Eagle was spot on: perceptions do matter, and they are considered important enough to be enshrined in the Ministerial Code. But David Aaronovitch was just too important to bother looking before going in feet first on those who he deemed less worthy of attention than Himself. Philip Collins and Camilla Long also failed to look before giving their gushing endorsements.

David Aaronovitch, here’s your arse on a plate. Mind the door doesn’t hit you on the way out.

Is it not also the case that Whittingdale was on record as supporting Leveson part 2, but then mysteriously seemed to change his mind? That goes beyond 'perception' surely ...

All that good stuff is being researched and filtered as I type. There will be more to come - a lot more.

That Steve Bell cartoon is, quite simply, brilliant.

I bet it has Murdoch shills like Aaronovitch eating their own livers.

The moment you see modular neocons like him on a case you know the opposite opinion is certain to be the best one.

More and more he's beginning to look and sound like a lowlife East End gangster. Then again......what's noo?

"That Steve Bell cartoon is, quite simply, brilliant"

Wonder if Aaronovitch spots the irony of lines being drawn literally? The weaver and the web that he made for himself although sadly he's not that imporatnt to make it into the cartoon.

The cartoon in the Indy is actually even better

Who's that sexy bird on top of that building?

Send her to my office.

The old scattergun approach. With luck might hit one or more targets at the same time? Possibly Dacre's way when with grouse? I hear he has plenty.