Mail Editor Hijacks The One Ronnie

Yesterday, the world of entertainment was left a little bit less entertaining, with the death at the age of 85 of comedian Ronnie Corbett. The shorter one of The Two Ronnies was remembered by those who knew and worked with him as kind and helpful, an exponent of more gentle humour. Over at the Northcliffe House bunker, though, his passing was seen not as a time to remember and reflect, but to settle old scores. 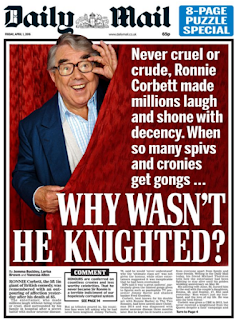 Thus is was that the Mail’s front page today splashed Corbett’s face across it, along with the thundering “Never crude or cruel, Ronnie Corbett made millions laugh and shone with decency. When so many spivs and cronies get gongs … WHY WASN’T HE KNIGHTED?” And there was more: “his countless fans were left asking why the 'ultimate class act' had never been knighted … MPs said it was 'a great sadness', particularly given the tainted gongs given to figures such as Jimmy Savile”.

Well, two MPs did. And some in showbusiness too. But the Mail also lets slip that Corbett’s former double-act partner Ronnie Barker failed to secure a K, and nor did the likes of Morecambe and Wise. Stuff happens with the honours system.

That does not deter the Mail, which wheels out Jimmy Tarbuck, Judi Dench, Bruce Forsyth, Julian Fellowes and Anita Harris in support, before putting the boot into those who it considers unworthy of honours, including Savile, Philip Green, Fred Goodwin, Cyril Smith, Anthony Blunt, Karren Brady and Michelle Mone. But this assault on the honours system is not about Ronnie Corbett, but the Mail’s editor Paul Dacre, who has seen others in his profession knighted, and has decided he should also be thus honoured.

Back in December 2011, the Mail railed at “Tainted New Year Honours … Knighthood for Tory donor who made millions from credit crunch and CBE for jailed tycoon … Ex-convict Gerald Ronson and Conservative Party supporter Paul Ruddock both honoured … David Cameron accused of being 'out of touch' with decent British people … Government source says Prime Minister has no personal involvement in deciding who receives honours … Founder of online gambling company bet365 also appointed OBE”.

Other papers have just reported Ronnie Corbett’s death: only the Mail has been so tasteless as to hijack it for its editor’s vanity and desperation. No surprise there, then.
Posted by Tim Fenton at 14:19

This outburst is presumably because Dacre himself hasn't been given so much as a 25-yard swimming certificate by anybody.

Dacre can't be far off "going into care."

Which is more than he and his gutless hacks have ever done for journalism.

I must say I find the image of Dacre looking in his shaving mirror and seeing a knighthoodless twisted, bitter kipper staring back at him......totally hilarious.

If ever somebody needed serious treatment for loony hatred, it's him.

Exactly. The front page of The Sun also states that a knighthood was on the way, but the response of the Mail would be "why wasn't he knighted before x, y and z". It wasn't as if he hadn't been honoured before, as he had a CBE.

There's plenty of people who have been in the entertainment industry for decades at the same level of recognition who haven't been knighted either: Ringo, Nicholas Parsons, Rod Stewart, Barry Cryer, the Pythons, Michael Aspel, the list goes on. Ken Dodd might be a dodgy one considering his previous issues, but that hasn't stopped the honours committee before.

As said, simply replace the name "Ronnie Corbett" with "Paul Dacre" in the article and it's obvious.

It never occurs to the numpties, does it, that both Ronnies might have politely declined an offer. And left it as a private matter.

And then said numpties would say these things are public, not private.

The lesson here appears to be that the Mail's editor needs to lay off the "Cruel and Crude" to clear his path to Gongland.