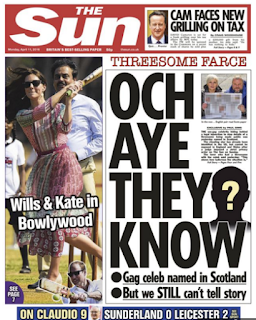 Why this should be has changed over the past week: at first, the Sun knew that this story would guarantee the sale of more papers and a significant uptick in clicks on its website. Then, as it became clear that there would be no exposé and therefore no extra sales, the campaign was if anything intensified - out of sheer vindictiveness. It was the Sun’s right to plaster this couple over the front page in order to score More And Bigger Sales Figures For Itself Personally Now, and woe betide anyone who got in the way.

So it’s Labour’s fault, that’s what: “The revelations are the latest hushed up by mega-rich celebrities using Article Eight of the European Convention of Human Rights - enshrined in British law by Labour in 1998”. The Sun would rather nobody had the right to privacy. It gets worse: one of the couple who gave the Sun the story has obligingly told the paper exactly what it wants to hear about those rotten foreign Human Rights.

I kid you not: “The sooner this ridiculous situation is sorted out the better. Let’s hope a British Bill of Rights comes out that takes precedence over European law, which English judges seem to be following … It is bizarre that this couple are allowed to use privacy law to silence a true story when they court publicity”. That could have been, and probably was, written for him. But it’s the editorial where the dishonesty line is crossed.

It tells “Yesterday a Scottish newspaper published the names of celebs who had used a court order in England to stop publication of details of an alleged affair … Yet we’re still not allowed to tell you … The details of what the celebs were up to is not the concern”. And to that I call bullshit. What they were up to is the Sun’s one and only concern.

Why did the paper want to run the story in the first place? Because of what the celebs were up to. There was zero public interest defence - it was just someone well-known that the Murdoch press has a grudge against. It was about vengeance and vindictiveness. The further claim in the editorial, “This can only lead to an abuse of power and crushing of freedom of the press” is therefore also bullshit. The only freedom the Murdoch doggies want is to lord it over everyone else in order to score a few more sales.

Me, I'd prefer a Bill of Rights that excluded Nazis like Rupert Murdoch, "Lord" Rothermere, their employees and readers. After all, Germany has banned Nazis from public life.

Murdoch and his Bullingdon piggies wouldn't understand "freedom" and "decency" if they bit them in their flabby fat arses.

so the name can be published in scotland. but scotrland is in the EU as well so why is it not blocked under EU law?

"No, the Murdoch doggies can’t even let their readers know which paper north of the border has published the names! " At least one paper either side of the border has named the paper concerned. To play safe, I won't name them.
Academic really as an MP is reported as about to name the couple in the House.
While I have zero interest in celebrity matters, I don't like to see the courts making fools of themselves with pointless injunctions.

How about about An Aaronovitch non conspiracy theory?