While Sadiq Khan, Labour’s candidate for next month’s London Mayoral elections, sticks to an issues based campaign, his Tory opponent Zac Goldsmith has allowed his effort to be sidetracked by a mud-slinging and dead cat approach, where his supporters have set great store by painting Khan as some kind of extremist, because he’s a Muslim, and as any good dog whistler knows, they’re all dead scary. 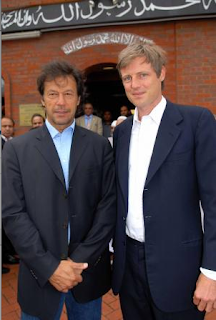 So the usual supporting cast of Tory suspects has been out in force to ram home this message: after Goldsmith himself called Khan “radical and divisive” (cue dog whistle), Michael Fallon popped up in the Tory-supporting Evening Standard to denounce Khan as a “Labour lackey who speaks alongside extremists”, and that he was “unfit” to be Mayor. Having left his dead cat on the table, others piled in to back him up.

This meme was developed by the current, and increasingly occasional, Mayor Alexander Boris de Pfeffel Johnson who took a sample of one to claim that Labour was an anti-Semitic party (look over there, chaps!) before proclaiming that “unless we can elect Zac Goldsmith … they will plant the red flag back on the top of City Hall … [Khan] has been sharing platforms with some of the most backward and sectarian forces in Islam”.

Bozza used the Tories’ Spring forum to double down on this: “Sadiq Khan has shared platforms - to put it at its mildest - with some pretty dodgy people with some pretty repellent views”. Michael “Oiky” Gove went further: “There can be absolutely no place for sharia law in our justice system … Sharia law demeans women and treats them as second-class citizens. These views are incompatible with being mayor of London”.

Did Khan even propose such a move? What the hell, chuck another dead cat on the table. Theresa May repeated the suggestion that Khan consorted with extremists, concluding “This is not the judgment London needs in a mayor at a time when we face a significant threat from terrorism”. But there were two problems with this analysis: one, it was turning off the voters, and two, Goldsmith was the one with the real extremism problem.

As my good friend Sunny Hundal has pointed out in a piece for Independent Voices, Zac Goldsmith goes back a long way with Imran Khan, former cricketer and latterly Pakistani politician, whose advocacy of dialogue with the Pakistan Taliban has led him to refuse to blame them for shooting Malala Yousafzai - even after the group claimed responsibility. Goldsmith has said Imran should be Prime Minister of Pakistan.

Imran Khan supported Goldsmith’s bid to become an MP in 2010. Last month, he urged support for Zac’s Mayoral bid, for which the candidate thanked him. But he has also openly defended the Pakistan Taliban. One Pakistani commentator observed “Imran Khan truly believes that the Pakistani Taliban have a legitimate cause and that they are people with whom negotiation, dialogue and compromise is a possibility. … the Pakistani Taliban is the most backward, savage, cruel and downright despicable group of fighters in the world today”. And there are Goldsmith and his pals saying “look over there” at Sadiq Khan.

Expect the right-leaning press to have a problem reporting this les than fortunate aspect of Goldsmith’s campaign. But the story will, once again, get out there. The Tories’ attempt to paint their opponent as an extremist is going to come back and bite them.
Posted by Tim Fenton at 16:51

The notion of far right tories labelling almost anybody "extremist" is flat-on-its-face hilarious - given their propensity for enriching themselves at the expense of our most vulnerable citizens.

If Dodgy Dave's lineage is distinctly suspicious in that respect, so is Goldsmith's. Has anyone checked out his offshore connections?

The way things are going, London's well on course to becoming a cockpit manned by Brit Nazis and conmen. Which means whoever wins is almost an irrelevancy - it certainly is to the overwhelming majority of Britons, who wouldn't touch the place with a barge pole.

If only Khan (Sadiq) would declare for 'Dump the Garden Bridge', he'd be a shoo-in for me. Otherwise its going to be hard for me come May.