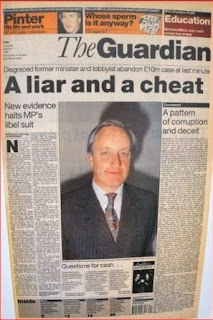 Neil Hamilton can protest all he likes at the actions of those in UKIP who are unhappy about his potential candidacy. But his record and reputation is there for all to see, as is his over-zealous recourse to libel actions, which left him with a £3 million bill and facing bankruptcy. He is a thoroughly unsavoury character and anyone in UKIP who seeks to bring this to a wider audience is to be commended.
Posted by Tim Fenton at 10:53

He gets around does this boyo!

He also had to drop out of the running for prospective candidate for the South Basildon and East Thurrock constituency in December 2014 according to The Guardian due to a letter from the party’s finance and resources committee challenging some of his expenses claims.

From the same article "Senior figures in Ukip had previously worked hard to successfully prevent the former Conservative MP becoming a candidate in Boston and Skegness, and managed to prevent him from becoming an MEP."

Have ambition to become MP will travel anywhere in the UK?

One wonders who is driving force here, NH or his wife Christine?

Three short sentences in the Guardian article sum up the arrogance and hubris of Mostyn Neil Hamilton perfectly:

"Another MP, Tim Smith, resigned his post as a Northern Ireland minister after he was accused in the same article of taking undeclared cash. He immediately admitted the Guardian story was true. Mr Hamilton, MP for Tatton, had instead tried to tough it out before resigning under pressure from Mr Major."

Isn't it time Mostyn asked Google to forget him?

From memory: Neil Hamilton is an anagram of 'ah ten million'. Or, if you prefer 'then a million'.

"Isn't it time Mostyn asked Google to forget him?"
Hush! He might read this blog.

A while back I wrote about Hamilton, UKIP and the Monday Club.