Britain has not seen a new national newspaper for 30 years, when the Independent launched. That would be the paper that will cease publication - in print - next month in the face of years of declining sales. All other print titles are suffering a sales decline, and a corresponding loss of the advertising revenue that they need to remain viable. On the face of it, launching a new national paper is, at the very least, counter-intuitive. 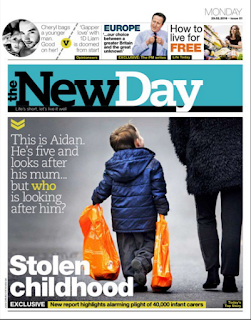 But that is what the Mirror Group has done with The New Day, free today but paid-for afterwards. The 40-page publication will hit newsstands on weekdays only. It claims that it will be editorially neutral, with no leader column. Readers will not be “told what to think”. The content will come mainly from other Mirror Group titles, to be edited down and presented in a concise digest form. There is a staff of just 25.

And there will be no website, which is yet more counter-intuitive in this age where newspapers are trying to “go digital” while still being able to “monetise” the content they put out there, whether by erecting paywalls or getting advertisers to stump up more. All that The New Day will have is a Twitter and Facebook presence. But very little of its content will appear there. Just the odd teaser, and front pages. 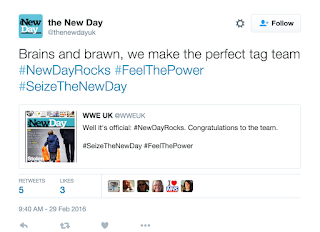 Editor Alison Phillips has toured studios promoting her new charge - yesterday it was The Andy Marr Show (tm), and today it was Good Morning Britain (that trip on the TiltyLiner (tm) to Manchester for BBC Breakfast perhaps too challenging) along with an attempt to get a word in edgeways with Nick Ferrari on LBC. There is optimism in abundance.But does this team seriously expect to make a success of the paper?

The signs are not all good. Today’s first edition, far from “not telling readers what to think”, has a well-trailed article by the Prime Minister on why the EU is sufficiently wonderful for all those jolly good readers to toddle along to the nearest Polling Station in June and vote for Britain to Remain a member state. There will be columnists - invariably bringing their own opinions - although these will not appear on fixed days of the week.

There will be no specific men-only or women-only areas of the paper. But there will be slebs. And while today brings the latest manifestation of Cheryl Curl, or whatever she’s calling herself this week, before long it will be desperation time with eternal wannabe Karen Danczuk, a sign that the barrel has already been scraped. I can tell Ms Phillips that the market for reading Kazza’s drivel is in the vanishingly small category.

And if readers are being expected to pay for The New Day, where is it going to make an impact when every large city is already covered by free sheets like Metro, which is established, dominant, and has the Daily Mail’s resources behind it? However you slice it, The New Day’s concept struggles to make sense. Print is in decline. We’ve tried optimism before and it has failed to make an impact on the Shock Horror merchants.

It would be good to be proved wrong, but I can’t see The New Day surviving for long.
Posted by Tim Fenton at 10:28

Its not survived at all near me. Tried two newsagents in the bus station and neither of them had any copies.

I asked for it and I may as well have asked for a copy of Pravda! Never heard of it was the response from both.

Reading this I don't think I missed much.

It's being launched free today, goes up to 25p for a fortnight, then 50p from March 14th. Meaning it's going after the I's audience, and it'll have a fortnight to do that. And they don't have Mark Steel on board. Good luck with that.

"The content will come mainly from other Mirror Group titles......" - I may have spotted a problem here. Presumably they mean local titles feeding them. Oh dear! In Crewe that means the Chronic(le) and they haven't a clue what is happening. Totally dependent on press releases and trawling twitter for witnesses (well at least people who claim to be witnesses). They closed the office and had what's left of the staff work from home "on cost grounds" but I swear it's because they couldn't find their own way to work! If the other group titles are this bad, I give it a month!

I lost interest when I hear the word Mirror!

I have a subscription to The Economist because it has specialist staff who know their subject matter inside out, correspondents posted throughout the world, and because the overall amount of effort put into it makes me feel the wish and need to pay. It has a line, I often disagree with it actually but it's a good exercise to sharpen my arguments against.

Can The New Day boast such credentials?

Well, La Boniface had to do something approaching proper journalism for today's edition.

An odd phenomenon all-round, though. 40 pages and very, very lightweight. In the 'coffee-break magazine' category. 10 pages of a more-or-less proper newspaper, Of which 4 were sport. And 2 double spreads of a reasonable 'feature article' kind.

Clean fresh look, which might wean a few off the Metro - no mean achievement if it happens, but I fear far too many are wedded to that rather naff freesheet.

Just can't see so far, that there is a good reason for it to prosper.