The Murdoch press is clearly under instruction to peddle the most virulently anti-EU line it can muster, even if it means backing the views of Nigel “Thirsty” Farage and his fellow saloon bar propper-uppers at UKIP. And a prime example of this desperation has come from the Sun’s appallingly snooty political editor Tom Newton Dunn today, as he tries to suggest that all those rotten foreigners are harming the NHS. 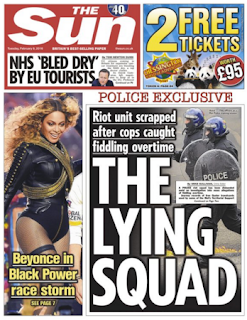 That’s the NHS that Newton Dunn and all the others who go private wouldn’t touch with a bargepole, but hey ho. The screaming headline tells you all you need to know: “NHS ‘bled dry by EU tourists coming to Britain for expensive cancer treatments’”. And who would the source be for this highly creative assertion? “Top doc Angus Dalgleish warns hospitals struggle to cope with pricey treatments”. Really? Do go on.

“EU citizens coming to Britain for expensive cancer treatment are bleeding the NHS dry, a top doctor claims … As David Cameron negotiates to keep us in the EU, Professor Angus Dalgleish will tell a Brexit conference our hospitals are struggling to cope with foreign patients coming for care worth up to £200,000 a year … He will say: ‘The NHS is on its knees and could collapse completely’”. Do we get an example of this “bleeding dry”?

Well, no we don’t. And nor does the Sun let its readers know that Angus Dalgleish is not the kind of “top doc” you are likely to see when visiting hospital. Since he returned to the UK from Australia in 1984, he has been a researcher. He does not work on the NHS front line. And he is a fully paid-up member of UKIP, something that Newton Dunn mentions only in passing (Prof Dalgleish’s election address can be seen HERE).

Newton Dunn then tells readers that Dalgleish “also said EU red tape has held back the search for life-saving cancer cures”. What he fails to mention is that Dalgleish founded a biotech firm developing cancer vaccines, is that firm’s research director, and sits on the medial board of another biotech firm. He is not a disinterested observer.

It’s also about paranoia: “the UK suffers more than any of the other countries in the EU, due to the fact that our government agencies rigorously enforce these suicidal directives, whereas many other countries in the EU ignore them”. Enforcement of suicide too - is there nothing these dastardly foreigners will not do in order to subjugate us Brits?

Tom Newton Dunn could have chosen any number of mainstream Eurosceptics to use in putting together his copy. Instead, he goes to a ranting Kipper with a track record of using highly inflammatory language, who can’t back up his hot air with a single fact, except to keep on telling anyone who will listen that the foreigners are coming to get us.

And it’s the Outers who say their opponents are desperate. Not at the Sun, though.
Posted by Tim Fenton at 10:35

£200,000 a year, 'bled dry'? Surely even the average downright thick Sun reader would realise that amount is nothing in the grand scheme of NHS funding?

But yes, not so much news as a press release rewritten.

Is their any possible coincidence that earlier today BBC Breakfast were leading with the story "Record Rise in NHS dissatisfaction levels" and non-bullying Newtron-Bombast runs with this NONE story?

Shirley the headline should be "BBC now controlled by Rupe"

I think he means per head. Even an idiot kipper gets traduced by the Sun.

Well, when my wife was fighting cancer, a single course of the experimental drug, 2 months I believe, was about 30K a time (Oxford churchill). It was several thousand a time for the 3 weekly trial the year before that so 200k is about right.

This was funded by a combination of the central fund and the pharma that were testing the drug, thing is only a certain number got that drug (it undoubtedly gave her a few more weeks) so there was some pressure there but if there's a big bill for the cutting edge cancer treatments then the NHS won't always be wholey responsible and I'd suggest if those bills go unpaid it's because accounts aren't getting their act together and billing as they need to.

My question would be, incompetence or, a fear of opening pandoras box if the places the Brits abroad start billing back?

One thing with departments who work like this. You don't get great care on the personal level - you're made to feel like you are their project rather than their patient, yes you get a cutting edge treatment but you feel like a glorified lab rat.

Well done, Tim, for highlighting yet another lying attack on the NHS by Yankified privateers.

What this episode demonstrates is how there are still some Brit medics like Dalgleish willing to sell their arse to corporate spivs. To say nothing of his abandonment of the Hippocratic oath and the principle of "First do no harm." What a disgusting corrupt coward, a disgrace to the medical profession!

As for mainstream media, including the BBC, its employees long ago sold out to extend their miserably compromised employment by sociopaths like Murdoch and Rothermere. But one day they will find the sociopaths have decided such employees too are dispensable: guess what, by then there'll be nobody to help them defend their living.

The NHS - and what's left of social democracy in Europe - is one of the last bulwarks against a "globalised" nazified war economy. If neocons are allowed to continue their corrupt thievery we can expect even worse versions of the Bullingdon pig's head gang. Do we really need to list the precedents?

So, they play pretend friends.

Is there anything left to vote for?

If there is an alternative that is popular the panic will set in and they'll send that Pillock Carswell to infiltrate.

@ Andy McDonald: "Surely even the average downright thick Sun reader would realise" - I suspect not, a number like that is many times more than the most they've ever dealt with, it's 10-20 years pay to them. If they had the IQ to understand they wouldn't be reading the Sun!

There is actually a very important claim elsewhere on that page (which being the Sun may or not be true, obviously). The story about the police overtime fiddle claims they were busted after investigators tracked their Oyster cards. Just stop and think for a moment. Transport for London handing over details of individuals movements so that their employer can see what time they went home. Not a murder investigation or anti-terrorism but a bit of auditing. It's already virtually impossible to travel by bus in London without using Oyster and the trains will be the same soon. And politicians of all shades keep chucking in suggestions that the rest of the country should follow suit.

Ern... Is it not the case that the medical costs of EHIC card holders (which would encompass most if not all EU tourists) are reimbursed by their home nations? Not sure what the situation is with UK resident workers from the EU, but they're neither 'vampire' tourists nor divested from the NHS (being themselves UK tax payers).

@ anubeon: UK RESIDENT workers from anywhere should be paying tax and NI (at least they should be registered, whether some ever earn enough to be liable to pay tax is another thing.....) - therefore they are as entitled to use NHS as any Sun reader. If they aren't registered for NI then they could be accused of screwing the system if they used the NHS - but the reverse is that they wouldn't be able to claim any benefits which should please the Sun.

There is one important point about EHIC - it does not cover you if you travel for the purpose of treatment, only treatment where the need arises during a temporary visit for another purpose.

in what alternate reality could ukip ever take power?

I could tell you. Then I'd have to kill you.